Long haired, cream Dachsund named Sadie was lost on Sunday, 6/26 in Virginia near the Chesapeake Bay Bridge Tunnel and Virginia Beach. She is wearing  a blue harness with (possibly) a black leash, with leather trim attached. She is 18 pounds and overweight.

UPDATE: Lucy has been found. Many thanks to all the folks that looked for her!

Our 9 year-old Maine Coon cat, Lucy, has been missing since yesterday early evening. She was last seen on E. Bay Dr. in Marina Villages. Please call/text Linda at 757.619.2860 if you see her.

On July 2, Experimental Film Virginia will be hosting Art in a Barn, 242021 Seaside Road/Riverside Farm Road, at the Seaview Creek Farm event space where the lively tradition of gathering in barns is continued, transforming the space into a stage for dance, music, projection, community, and good food and drink. Special Guest Admiral Michael Malone. 6:30 pm.

There will be Bobby Seckers BBQ dinner for $20

END_OF_DOCUMENT_TOKEN_TO_BE_REPLACED

Special Report to the Cape Charles Mirror by Ken Dufty

Supervisor Duer opened the session by listing the many accomplishments this new Board has enjoyed (using that term loosely!) in their first 6 months on the job. The list includes an amended and more balanced zoning ordinance (a work still in progress), a reasonably balanced and restrained 2017 budget, an expanded EMS budget and staffing, closure on the USDA obligation of nearly $600,000, project permitting and deliberation, and many more issues that were previously unresolved by the former board. True to form, Supervisor Duer explained that he is a man of few words (but as we all know by now, a man of action) and he turned the opening remarks over to Chairman Murray.

Chairman Murray then expanded on the Board’s accomplishments over their first (1/8 of their term) half of this year. He expressed concern about the next election, saying that in one year, candidates would have to be certified to run for county supervisors, and the balance of the Board is at stake. He expanded on the debate over the zoning ordinance, explaining that the Board had taken many of the good points of the 2015 proposed ordinance and melded them into the 2016 adopted ordinance, and also informed us that tweaking of the ordinance is still in the works. He said the increased setbacks for poultry houses and the expansion of working waterfronts were two highlights of the new ordinance, also explaining that while there still COULD be a poultry house or two on very selective and isolated parcels, chicken houses are “not a good fit” for Northampton County. END_OF_DOCUMENT_TOKEN_TO_BE_REPLACED 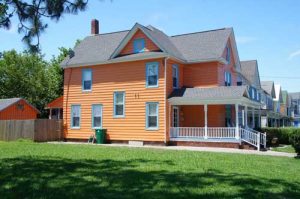 With more and more people buying houses, mainly as second homes or vacation rentals, the paint colors chosen to ‘re-do’ homes in the historic district have been dubious at best, and in many cases appear to be weak, failed attempts at mimicking the ‘jelly bean’ cottages of Marina Villages. Disturbed, frustrated and generally fed up by the general lack of taste and regard for the Historic Register, the Historic District Review Board aims to take matters into their own hands by coming up with some form of color palette that would provide a foundation for acceptable use for the historic homes of Cape Charles. Also, the color proposed for “new buildings or additions should be compatible with those in use on historic buildings in the historic district”.

Currently, the Historic District Guidelines do make an attempt to define the types of colors to be used in the Town’s Historic District, however there is quite a bit of leeway. That said the “Board is empowered to place specific colors in the Guidelines”.
END_OF_DOCUMENT_TOKEN_TO_BE_REPLACED

Cape Charles favorite Kelly’s Pub has been ranked as one of the top family restaurants by Chesapeake Bay Magazine. The ranking is not surprising, as Kelly’s has been providing great food, great service and great atmosphere for many years now. Tourists still rave about the historic décor, the great menu, and of course, the best beer selection on the Eastern Shore. Congratulations Kelly’s!

Several years ago, I was fortunate to be cast by Sheila Cardano in the historical play A Piece of Eden. It was there that I first became acquainted with the rich and beautiful history of the Eastern Shore. Reading Charles Landis’ collection of essays, “The Eastern Shore: An Introduction to the History of the Eastern Shore” is just as exciting. While many of us that live on the Shore want to know more about its history, we just don’t have the time to do all the research ourselves. Through a series of well-crafted essays, Charles Landis fills in the gaps for us.

Landis’ research offers a different perspective on Eastern Shore history, and how it has shaped our culture and society, and how it was, and is the original frontier between old world England (Europe) and modern America. Landis breaks up the book into two series of essays. Part one deals with the historical events, while part two highlights the important people that shaped our history.

The first section establishes the author’s approach to the region’s history by examining the linear movement of time from 1614 to 2015. The first essay deals with Early Settlement (1608-Mid 17th Century), following Thomas Savage, and Governor Sir Thomas Dale who purchased land on the Eastern Shore from Chief Debedeavon on what we now call Plantation Creek. The second Essay highlights how the people of the Eastern Shore have historically been willing to protest and  fight for independence, as well as promote representative government in the new world. Mr. Landis brilliantly covers the Northampton Protests of 1652 and 1766 where the people of the Eastern Shore first declared taxation without representation to be illegal and unconstitutional, the first protest of its kind in America.
END_OF_DOCUMENT_TOKEN_TO_BE_REPLACED

The Historic District Review Board received an Application for a Certificate of Appropriateness for 439 Mason Avenue to add a handicap ramp, front stoop removal, window shutters, new front gable, roof cupola and signage for a Dacha-style Russian Tea Room. The applicant requested the façade changes for the existing 1970s-era, vinyl-clad Ranch style frame dwelling so as to create the impression of being in Central Europe or Russia. According to staff, this will not be a home occupation; there will have to be a change of use to commercial.

While this board generally defers to Chairman Joe Fehrer’s knowledge, experience and expertise, this application created a bit of a mutiny. Fehrer found the entire idea somewhat ridiculous, “I just don’t see it…to take a rancher like this, and try to make it look like something else. They were old houses, the way they were built–I just don’t think it’s right. The ornamental domed cupola, is just too much for a 1970s style rancher.” END_OF_DOCUMENT_TOKEN_TO_BE_REPLACED

The Cape Charles Mirror has received several messages regarding rumors of serious issues at Bayshore Concrete, that the company was “in a lot of trouble”. Information relayed to the Mirror revolves around word that the CEO and President Chad Saunders was released . The Mirror has been told that the issue was over “sand” that they had acquired for their manufacturing which was in some way contaminated; this has led to possible legal issues and environmental violations.

The Cape Charles Mirror spoke with Bayshore Concrete’s attorney, John Irving to confirm. Mr. Irving told the Mirror that the president had stepped down, but he could not comment further on personnel issues. Regarding contamination, Mr. Irving stated that in 2012 there was a lightning strike which resulted in an equipment failure; this also created a certain amount of fly ash (could not confirm the class at this time). Fly ash can be useful, but in this case, it had to be quarantined by placing it in separate pits. Analysis on the extent of the damage or contamination is still ongoing, Irving said. Mr. Irving told the Mirror he would provide the results of the analysis once it has been finalized.

We will provide more information as we receive it.