Cape Charles Mirror Sports Report – Wayne Creed
The Broadwater Vikings, behind solid line play, stingy defense and Major offensive performances by Tyler Major, Taylor Major and Major Morgan,  outlasted a tough and talented Arcadia squad 41-21. One of the hallmarks of a coach Palmer team is the ability to control the line of scrimmage, on defense by limiting the ability to run wide or through the gaps, and on offense, by being able to run and control the clock. Against Arcadia, the Vikings dominated the line of scrimmage on both sides of the ball. This led to a defensive performance that generally stymied the Arcadia attack, but also provided scoring opportunities for the offense. Viking’s twin attack of Taylor and Tyler Major was able to gap the Arcadia defense with several long, power runs. Quarterback Austin Murphy, with good protection, was able to use his strong arm and pinpoint accuracy to find openings in both the long and short game.

END_OF_DOCUMENT_TOKEN_TO_BE_REPLACED

Why should we vote for you again?

With elections just over a month away, it’s time for all you candidates to get the word out. Signs and posters are fine, but folks really want to know who you are, and what you stand for. Your friends and family may already know, but many in the Counties do not. The Cape Charles Mirror is offering to provide you with the opportunity to get your message out.

You can send your platform letters to capecharlesmirror@gmail.com, and we promise to print them as is (we will copy edit for grammar and spelling just in case…we just wish we had someone to do it for us).

The Mirror will also come out for a full blown interview at the location of your choice.

Photos and pictures are encouraged.

As was reported last winter, the Town plans to convert part of the beach boardwalk into some form of ‘Art Walk’. The installation of the Neptune statue, as well as the ‘LOVE’ sculpture is part of this design. As part of the overall project to consolidate works as a means to create the illusion of an ‘Art Walk’, the Mermaid and Dolphin sculptures were also moved from their previous locations.  However, during the move, our dolphin did sustain serious damage —the tail was broken. The damage was due to the Town crew’s failure to properly strap and hold the dolphin prior to attempting to move it. Public Works is evaluating the damage and determining the proper method of repairing the dolphin’s tail.

The Mirror contacted the Town, yet as of this printing, the fate of the dolphin is unknown. 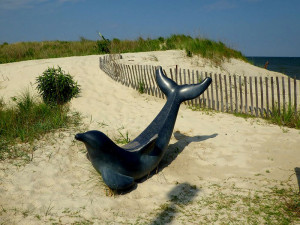 Commentary: The stupidity of this tragedy goes without saying, yet perfectly symbolizes the state of the ‘New Cape Charles’, and speaks to the more serious issue of the integrity and quality of the people we have running this town. The ‘Art Walk’ idea is patently ridiculous, yet it is another perfect example of the ‘Fire Hydrant Effect’. The new people that have clutched power in Cape Charles are like male dogs which cannot walk past a fire hydrant without stopping to urinate on it, just to let the rest of the world know that they’ve ‘been there’. These people feel like they have to urinate on every last inch of Cape Charles in order to leave their mark–to change it to resemble the places they were originally run off from. The outcomes, of course, speak for themselves: Bob Panek’s Wastewater Plant that stinks up the whole town, $10 sale of the old school,destruction of Mason Avenue via reverse angle parking, soon coming to Bay Avenue, higher taxes and fees to pay for gentrification (unnecessary development which destroys rural character), driving away Smitty Dize, and I could go on and on. Like the man once said, “When a shepherd goes to kill a wolf, and takes his dog to see the sport, he should take care to avoid mistakes. The dog has certain relationships to the wolf the shepherd may have forgotten.”

Due to proposed changes in the new county zoning ordinance, the Bay Act being superseded on the seaside is a real possibility. With unregulated Planned Unit Development, as well as what appears to be backhanded attempts by the County to introduce intensive farming (large scale poultry operations), degraded water, both sole source potable and natural mudflats used for aquaculture, are also becoming at risk. The spatially explicit effects of residential development on shorelines not only disrupt food web dynamics, but also have a detrimental effect by increasing erosion. In this photo essay, intrepid Mirror photographer Chris Glennon hops aboard Mike Steelman’s helicopter to take a first swag at documenting the current state of the Northampton seaside, and immediate barrier islands.
END_OF_DOCUMENT_TOKEN_TO_BE_REPLACED

Cobia remain along the bridge pilings of the CBBT, with some pods in open water as they group to move off. Reports of 50-pounds caught on live bait and bucktails. Tautog now are legal to keep and more should show around wrecks, artificial reefs and the rocks of the Chesapeake Bay Bridge-Tunnel as waters cool. Sheepshead should remain along the CBBT span for several more weeks.

Red drum are still being reported along the barrier islands, and in the surf along Fisherman’s island on the rise.

Flounder have still been working at the mouth of the Bay near the 1st and 2nd islands of the CBBT – reports some fish up to 5 pounds. Other flounder action has been reported near Kiptopeke wrecks.

Croaker action is being reported as good around old oyster beds, with some reports of up to 3 pounds around Oyster.

During the July Board of Supervisor’s Meeting, former Board Member Andrew Barbour made the statement that the twin pillars of Northampton’s economy are tourism and aquaculture. Barbour is correct, as shellfish farming on the lower Eastern Shore is considered one of the State’s most recognizable economic success stories. Given the prominent role aquaculture plays for Northampton, it would seem every effort would be made to not only promote it, but also protect it. Without pristine water, this industry will cease to exist.

“It is in the national interest, and it is the national policy, to encourage the development of aquaculture in the United States.” This statement in the National Aquaculture Act of 1980 showed that that Congress recognized that we had significant potential for aquaculture production. U.S. aquaculture, with an annual production of 594 million pounds of seafood valued at $1.2 billion in 2013, represents nearly 20 percent of the value of seafood caught or farmed in the United States.

END_OF_DOCUMENT_TOKEN_TO_BE_REPLACED

Bloom of Alexandrium in lower Chesapeake Bay along the north shore of the York River between Sarah’s Creek and the Perrin River on 8/17/2015. (Photo : W. Vogelbein/VIMS)

After losing a decision on the EPAs Pollution Diet limits, the American Farm Bureau plans to take its case to the Supreme Court. The AFBF is joined by the National Association of Homebuilders in the effort to overturn two lower court decisions. The AFBF and the Homebuilders originally sued the federal Environmental Protection Agency in federal district court in 2010—that case was lost, as was an appeal to the Third Circuit Court.
END_OF_DOCUMENT_TOKEN_TO_BE_REPLACED

On the Eastern Shore, as we continue to grapple with economic development issues, one shining light has been the success of our aquaculture industry. For those that grow oysters, they have one perceived nemesis, the cownose ray, or the Chesapeake Bay Stingray. Cownose rays, left to their devices can ravage oysters planted in underwater farms. Due to the ray’s avarice for oysters, some aquaculture advocates have started a campaign to reduce ray populations by leveraging commercial fishing: “Eat a Ray, Save the Bay.” The push to control rays has resurrected another Chesapeake Bay pastime, bow fishing. People use a bow and arrow to shoot rays from a boat.
END_OF_DOCUMENT_TOKEN_TO_BE_REPLACED

Hannah DeMarino is on to New York!

I would like to thank everyone who came out to The Arts Enter Legacy Concert to Benefit Hannah DeMarino &
Strawberry Studios Renovations for after school programs on Saturday Sept 12, 2015. I hope you all enjoyed the show!
We had a great time entertaining you! I want to say A BIG THANK YOU to all my Performers! You all did a Fantastic job!

NOAA, for this summer’s Oyster Day (August 5th), put together these oyster facts. See the globally recognized research NOAA does with oysters and shellfish.