While this event took place in the Gulf of Mexico, many of us still travel the waters all along the coast. Also, people around here shoot skates for sport, so the idea that someone would also shoot a dolphin in our waters is not that far-fetched.

NOAA’s Office of Law Enforcement is investigating a case involving a pregnant bottlenose dolphin found dead on the beach in Waveland, Miss. A necropsy, or animal autopsy, revealed the mother dolphin died of a gunshot wound, with the unborn calf dying as a result of the mother’s death. 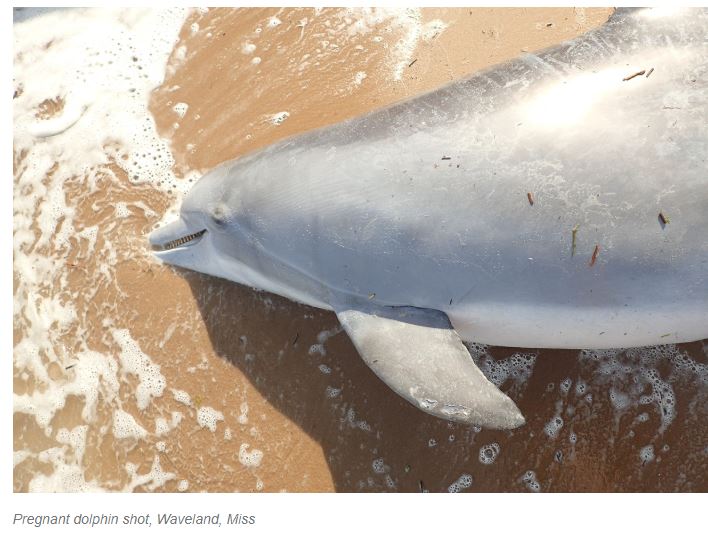 NOAA’s stranding network partner, the Institute for Marine Mammal Studies (IMMS), recovered the dolphin on April 30th and placed the animal in their freezer until a thorough necropsy could be conducted. It was during necropsy that the gunshot wound was discovered. A small caliber bullet was found lodged in the dolphin’s lung and proved to be the cause of death.

NOAA officials seek information from anyone who may have details about this incident. Please call the NOAA Enforcement Hotline at 1-800-853-1964 or the Slidell, LA, Enforcement Field Office at 985-643-6232. Tips may be left anonymously.

Lightkeepers, The Humane Society of the United States, CetLaw, Ocean Experience, the Animal Welfare Institute and Dolphins Plus Marine Mammal Responder are offering a combined reward of $11,500 for information leading to the successful identification and/or prosecution of the person(s) responsible.  Include your name and contact information when calling enforcement to be eligible for the reward.