The Alliance to End Chickens as Kaporos is a project of Machipongo’s United Poultry Concerns. Formed in New York City in June 2010, the Alliance is an association of groups and individuals who seek to replace the use of chickens in Kaporos ceremonies with money or other non-animal symbols of atonement. The Alliance does not oppose Kaporos per se, only the cruel and unnecessary use of chickens in the ceremony.

NEW YORK, September 14, 2018 /PRNewswire-USNewswire/ – On September 17, 2018, hundreds of activists from the Northeast and Canada will stage a Mass Vigil where brutal slaughter is performed in residential streets as part of an “atonement” ritual known as Kaporos. Under Section 356 of the Agriculture and Markets law, individuals may intervene if an animal is deprived of food and water for 12 hours or more while confined. During this Vigil, activists will exercise their right to provide water and food to thousands of suffering 6-weeks-old chickens. 60,000 chickens are crammed for days in plastic crates prior to the Kaporos ritual, which includes merciless swinging by their delicate wings. Such handling causes broken bones and torn ligaments as they scream in pain. 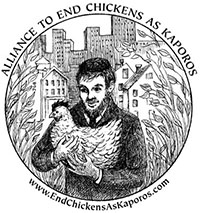 The ritual culminates in throat cutting at illegally rigged-up slaughter stations, where children stuff the wounded birds into filthy traffic cones to bleed to death slowly in pain and terror. 15+ laws are broken, more than half of which are health codes, posing a significant public health risk (see the toxicology report), yet the NYPD aids this ritual thanks to Mayor de Blasio’s craven desire to curry favor with this powerful voting bloc of the Orthodox Jewish Community. His administration has come under fire lately for failing to enforce laws mandating a secular education for the children of these very same communities that are breaking the law with impunity.

WHO: The Alliance to End Chickens as Kaporos, Jewish Veg, and The Save Movement – including Anita Krajnc, whose infamous arrest for providing water to a thirsty pig en route to slaughter was covered by news outlets internationally during the so-called “Pig Trial.”

WHERE:  Kingston and Eastern Parkway in Crown Heights, Brooklyn

WHY: Activists are holding this Mass Vigil and providing care to these mistreated birds as an act of civic duty and compassion for the birds who have been crated for days in the streets without food or water, and to expose Mayor de Blasio’s deference to politics over the public interest.