Watching the sunset from many coastal communities like Cape Charles, whether there are bulkheads or breakwaters in place, climate change, and more importantly sea level rise is a creeping concern. What does a community do when the seas rise? A new report in Nature Climate Change magazine looks at 27 cases of managed retreat, and they found it was most likely to happen and be successful when the government and citizens agree on the solution. 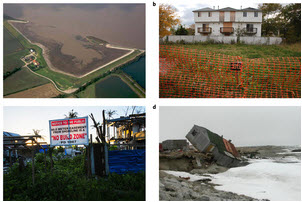 From the report, “Managed retreat is a potentially important climate change adaptation option, providing an alternative to structural protection or accommodation measures to manage natural hazard risk. However, its application faces challenges given the projected scale of climate-induced displacement and the difficulties of resettlement. Different sociopolitical dimensions emerge as particularly influential in each quadrant. The model establishes a foundation for understanding and anticipating case-specific complexities. It can be used to unpack the landscape of managed retreat and evaluate its potential future applications.”

Going back to 1993, the federal government’s Hazard Mitigation Grant Program has purchased 36,000 “high risk properties”, converting the land to open space as way of buffering against floodwaters.

Like Cape Charles, coastal-adaptation measures have mainly focused on protection (breakwaters, higher seawalls). Other communities have relied on zoning, or tweaks to development rules. In most places, managed retreat is not considered an option.

After hurricane Sandy, New York City’s Special Initiative for Rebuilding and Resiliency doubled-down on staying, noting retreat was not an option, “The time has come to make our city even tougher…The concept is just not in the city’s ethos.”

While New York has purchased and demolished many properties on the Staten Island shoreline, it has also promoted development along the waterfront, places that were flooded by Sandy.
Estimates are that over a million people will be forced to move due to sea level rise in the next century.

How Cape Charles and the Eastern Shore will fare is something that will require more analysis to determine whether staying, or managed retreat will be the best option.