Atlantic menhaden are considered by many biologists to be “the most important fish in the sea” because of the enormous number of predator species that consume them. This includes bald eagles, herons and egrets, brown pelicans, cormorants, gannets, gulls, loons, osprey and terns; predator fish like bluefish, cod, striped bass, sharks, and tuna; and marine mammals, such as dolphins, seals and whales.

While marine wildlife need menhaden to survive, reductions fisheries pull hundreds of tons of menhaden from the sea each year to make products such as human fish oil dietary supplements to fertilizers to beauty supplies to high-protein animal feed. In the past, unlimited catches led to severe depletion. 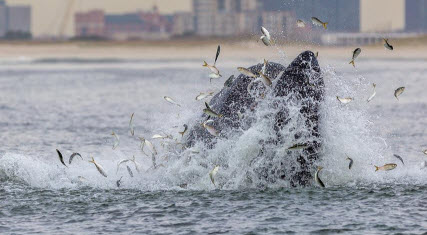 Whales are spending summers where no one remembers seeing them before; eagles, ospreys, gannets, and other fish eating birds are doing better than anyone can remember, sharks are rebounding along the East Coast as nowhere else in the world, and high-value fish such as striped bass and bluefish have plenty to eat.

Currently, corporations are attempting to get the ASMFC to go back to previous high-volume, high-risk catch levels. The ASMFC Menhaden Management Board is now developing Amendment 3 to the Interstate Fishery Management Plan. The commercial fishing industry is fighting the ASMFC because they want to increase, not decrease their menhaden haul.
Citizens of coastal communities should support Option E in Section 2.6 of Amendment 3, which would direct ASMFC to leave 75 percent of the population un-fished, and require that the wild population never drops below 40 percent of its potential size if there was no fishing at all.

On November 13 and 14, the ASMFC will be making its final vote on Amendment 3.

Here’s How You Can Help
For the sake of the seas, please help us stop special interests from decimating the Atlantic menhaden’s population. Help us push Atlantic menhaden toward a return to abundance.

You can submit public comment and/or testify at a hearing in your state in support of Option E in Section 2.6. Option E is the most scientifically sound option that will help ensure there is enough menhaden in the sea for the marine wildlife that rely on them.

Public comments on Draft Amendment 3 will be accepted until 5:00 PM (EST) on October 20, 2017. Send your comments directly to where they will have the most impact and will become part of the public comment record. Contact: Megan Ware
Email: comments@asmfc.org (Subject line: Draft Amendment 3)
Atlantic States Marine Fisheries Commission
1050 N. Highland Street,
Suite 200 A-N
Arlington VA. 22201

The final action on Amendment 3 is scheduled for November 13 and 14 at the BWI Airport Marriott, 1743 West Nursery Road, Linthicum, MD.