While ships have been anchoring outside Cape Charles for years, the latest effort by the Coast Guard to propose a formal anchorage just outside our harbor is a bit different. The US Coast Guard was in town last Wednesday to brief residents about the plan for the new anchorage. No longer an abstract idea, the map provided by the USCG showed an area that could fundamentally change life not only for the residents of Cape Charles, but for Recreational fisherman, as well as commercial waterman.

Given the average depths around Cape Charles Harbor, the choice for this anchorage makes total sense. The Coast Guard wants an area that is between 25 and 45 ft. deep, and this area certainly provides this. However, there are other factors that need to be taken into account. 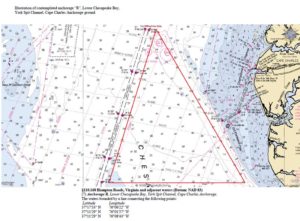 While many continue to tout run of the mill beach tourism as the next big thing, Recreational fishing has been, and will probably always be much bigger. People come from all over the world to fish our cobia, flounder, drum, spadefish and rockfish. What is going to happen if this anchorage becomes the next ‘it’ place, and winds up packed liked a shopping mall parking lot? How is the Rec fisherman supposed to maneuver around these big ships? From a safety standpoint, does this anchorage even make sense, given the number of folks that use this area for recreational fishing and boating?

For commercial waterman, especially our crabbers that have leased spots in this proposed anchorage, how will this affect their ability to make a living? It is hard enough to make it on the water even under the best of conditions, so why throw another roadblock in their way? While artificial reefs and clam beds may not be directly in the way, accidental spills by vessels this close to shore could pose a problem.

While we understand the USCG’s desire to formalize this anchorage, we’re not convinced this is really the best place for it, given the possible disruption to our economy and way of life. For the citizens of the Eastern Shore, we are sick and tired of being stepped on. When is anyone in government ever going to take our needs into account? For years, we have stood by and watched Omega Protein and its fleet of menhaden ships ravage and destroy the bay, while politicians take their money and stand by and watch. This has affected the Eastern Shore citizens more than anyone else, no one does anything about it. This anchorage could be just as devastating.

It is important to note that this is still in the proposal phase, and the Coast Guard is actively seeking community input on the matter, pros and con. Comments may be submitted in writing at the federal e-rulemaking portal at http://regulations.gov using the code USCG-2015-1118. On line comments must be entered by August 28.