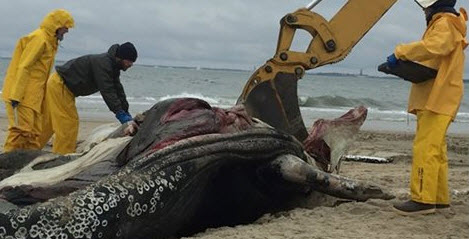 CHINCOTEAGUE, Va. (AP)— Biologists are investigating the death of a humpback whale that washed up on the shore of Chincoteague National Wildlife Refuge.

The Daily Times reports that staff from the Virginia Aquarium in Virginia Beach were at the scene Monday trying to determine a cause of death. The immature female was reported dead on the beach Sunday.

An aquarium spokesman said the whale had decomposed significantly, complicating efforts to determine cause of death.

Dead whales washing up on Virginia beaches are not especially uncommon in the winter.

Last month, the National Oceanic and Atmospheric Administration announced it would conduct an investigation into a spate of deaths of minke whales along the East Coast in the last year.