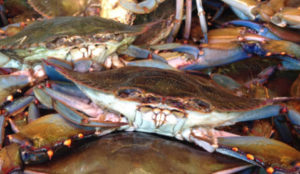 The Chesapeake Bay Stock Assessment Committee 2017 study shows female crab numbers have been growing substantially. There were 194 million female crabs at the start of the 2016 crabbing season, compared with 101 million last year. In 2014, female crab numbers were down to 68 million.

Juvenile crab numbers have also been growing, with 269 million counted last year and 271 million this year.

“The blue crab population is at a healthy level,” biologist Glenn Davis told the Baltimore Sun. “Having both juvenile and adult components at or above the long-term average has only happened once since 1994.”

Overall, the total number of Chesapeake Bay crabs at the beginning of this year’s season was 553 million, well above last year’s count of 411 million.