FOR IMMEDIATE RELEASE – The Friends of the Eastern Shore Public Library presents Fourth Tuesdays at the Library on August 23 with Bob Savage who will speak about the 17th and 18th century pipes recently found on the family farm near Painter. The event starts at 7:00 p.m. at the Accomac Library, 23610 Front St., Accomac.

In 2013 Savage was walking with a metal detector over a recently-plowed field on the farm when he found an iron band that turned out to be a remnant of an old barrel. Further exploration yielded a treasure trove of old pipes, many of which were likely made on the former Colonial Virginia plantation.

Savage will talk about the ongoing archeological work on the farm and what the findings are revealing about life on an Eastern Shore farm in the early days of the Commonwealth. The event is free and refreshments will be served. For more information, call the library, 787-3400. 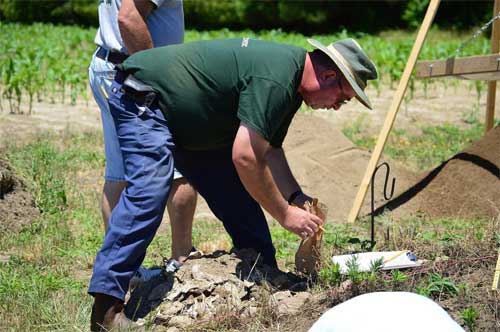