NORFOLK — A Canada goose was euthanized after being shot by an arrow, Norfolk police said.

Animal control officers responded to the Little Creek Channel in the 2800 block of David Court Tuesday afternoon after someone called about the injured goose. The goose was not able to fly, find food, or protect itself. 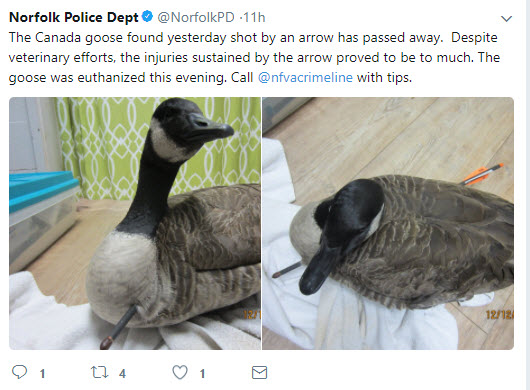 The goose was found swimming in the channel and was rescued by officers with the help of the caller’s canoe.

The goose was brought to the Virginia Beach SPCA and treated by its wildlife division. Originally police said the goose was expected to survive but later said it was euthanized on Wednesday night.

“Despite veterinary efforts, the injuries sustained by the arrow proved to be to [sic] much,” read a tweet from the Norfolk Police Department.

Police are reminding residents that shooting geese is a federal offense.

Animal control is looking for the person responsible for injuring the goose. If you have any information, please call the Norfolk Crime Line at 1-888-LOCK-U-UP.