Many of us may know Rayne Marshall as the girl that offers horse drawn carriage rides around Cape Cape Charles. If you are ever traveling down old Cape Charles Road, you may also see her practicing barrel racing. Over the past few years, Rayne has competed in many amateur events, but this year she will be competing as a professional at the State Fair Rodeo. She will be the first person from Cape Charles or Northampton County to compete at the State Fair rodeo in the professional barrel racing division. Pro riders from all over the country come to compete in this event.

Rayne’s love and involvement with horses is well-known on the Eastern Shore, as is her dedication to the sport of barrel racing. 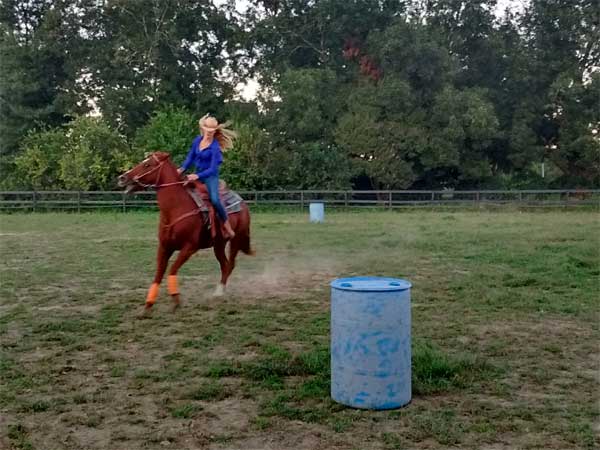 In barrel racing, the horse’s athleticism and mental condition and the rider’s horsemanship skills are tested as they maneuver through a clover leaf pattern at top speed.

The course consists of barrels placed in a triangle in the middle of an arena. The rider races into the arena with the timer starting when the team crosses the start line, and ends after completing the clover leaf pattern and racing to cross the finish line. The team that puts up the best time with tight turns, explosiveness, communication and no overturned barrels wins.

According to Rayne’s dad, Timothy Marshall, “Anybody who has anything to do with horses on the Eastern Shore knows Rayne and how dedicated she is to barrel racing. When traveling down old Capecharles road, you will see her practicing 7 days a week. In her spare time you will see her with her father doing carriage rides in Cape Charles trying to help pay for her new venture.”