On the Eastern Shore too many dogs are living their lives tethered to the end of a chain, even as tethering has been shown to be cruel and unsafe for dogs and for the public. While dog tethering issues are somewhat rare in Cape Charles, the town took a stand against the practice, setting a precedent by passing a NO TETHERING ordinance on Thursday March 16th. The ordinance is a complete ban on leaving an animal tied up and unattended for any amount of time, and carries with it a Class 4 misdemeanor, which is punishable by a fine of up to $250, but no jail time. 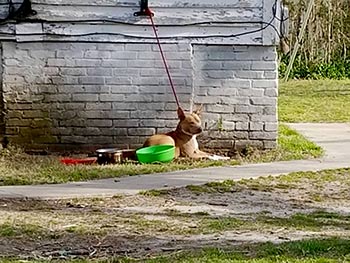 The language of the ordinance was crafted by town planner Larry DiRe, and was the culmination of almost 2 years of recent work, but 20 years since Cape Charles passed its first tethering ordinance, one that has been adopted by Northampton County.

The effort to protect animals within the town has been spear headed by Councilman Andy Buchholz and Planning Commissioner Dan Burke. The current ordinance found its genesis following public complaints of dogs that were being kept in a pen during winter months, and were forced to stand in 6 inches of freezing water.

The ordinance did not pass unanimously. The final tally was 4 -2, with Buchholz, Natali, Sullivan and Bennett voting yes, Bannon and Brown voting no.

Pushback on the motion came from Police Chief Pruitt, and former Chief, now Councilman Sambo Brown. Pruitt rattled off several issues with enforcing the ordinance, and noted that handing out a summons would, in the end be his call. Brown argued that if passed, there should be a zero tolerance policy. An example he used would be that if a tourist left their dog unattended for a few minutes to go into Brown Dog and get ice cream, they should be issued a summons.

The most strained moment came when Councilwoman Sullivan attempted to ask Chief Pruitt a question while he was voicing concerns about enforcing the ordinance. Pruitt’s frustration with the ordinance was clearly evident as he responded to Sullivan, “I haven’t finished.” Sullivan attempted to interject and Pruitt once again cut her off and stated, “I said I haven’t finished yet.”
Councilman Buchholz, unwilling to accept Pruitt’s concerns said, “I don’t care about any of that.”

Sullivan, once she was able to address Pruitt, asked whether common sense policing might be a way to realistically work with the ordinance, “I remember when I spoke about how I witnessed the police pull a driver over, and nicely explained the violation, and then just issued a warning. Couldn’t we do the same here? Give them a warning first?” Brown responded, “We have to enforce it equally…if we give one a summons, we have to give all of them one.”

“We have been working on this for 20 years. We had to step up and create an ordinance for this because the county did not have one then,” Sullivan said.
Whether Northampton  and Accomack will seize on this initiative and craft a similar ordinance is to be seen. Animal rights activists have told the Mirror that they hope this move by Cape Charles will be a catalyst for real change on the Eastern Shore.

The full ordinance is listed below.

ORDINANCE NO: 20170316
TO ADOPT MODIFICATIONS TO TOWN CODE ARTICLE X, SECTION 50-190 – TETHERING OF ANIMALS
WHEREAS, Article X, Section 50-190 of the Town Code addressing the tethering of animals was last updated in September 2004; and
WHEREAS, in an effort to clarify the current language and to include provisions for enforcement; now
THEREFORE BE IT ORDAINED by the Town Council of Cape Charles, this 16th day of March, 2017 that Article X, Section 50-190 of the Cape Charles Town Code be modified as follows:
§ 50-190. Tethering of animals. It shall be unlawful to tether any unattended animal whether or not the animal has been provided adequate space. A violation of this section shall be punishable as a class 4 misdemeanor.
**********************
Adopted by the Town Council of Cape Charles on March 16, 2017.