In 1952, Carl Jung published “Synchronicity – An Acausal Connecting Principle”, which focused on his belief that events may be connected by causality; they are also connected by meaning.  In recent weeks, we have had this theory tested in Cape Charles. The first event is cloaked in the skullduggery used force harbormaster Smitty Dize out of the harbor. Then, there was the mysterious proposal to try and sell the harbor, or at least lease it out to a ‘management company’. The major proponents of this strategy are also members of Bay Creek. Then, the Mirror received an anonymous response, here:

It is very disturbing to read that you have elements within the local government who want to barter away the greatest natural resource the town has. If you connect the dots you’ll see that these are the same people associated with organizations who have wanted “our” harbor for years. The very people who sold the town a bill of goods on Bay Creek-who still owes the town millions of dollars in water money- so it comes as no surprise that the same faces are surfacing again. Years ago the town went through a crisis with an alleged Conflicts of Interest situation with 3 elected officials. If you’re following the news you’ll see that the Mayor of VA Beach is also going through a similar situation and is surrounded by an army of high powered lawyers. The point is that Conflicts of Interest do exist in local govenment and the citizens must remain vigilant to protect the community’s assets. If and when the wind turbines are built off the coast of VA- the Cape Charles Harbor will be a major operations center for supply and distribution due to its harbor depth. Protect your harbor because it’ll be worth millions of dollars in the future; why do you think people want to OWN it?I think there has been a 25 year collective memory loss on the obligations contained in the various Annexation Agreements?

During the last few weeks, we have been reading closely the proposed changes the Planning Commission is making to the Cape Charles, Virginia Comprehensive Plan. Of note, Joan Natali, also of Bay Creek, is the Town Council representative on the commission. As we were pouring over some of the Comp Plan’s text, we received another bit of information, tossed over the transom. This inquiry asked us to look back into the Cape Charles, Virginia COMPREHENSIVE PLAN – Adopted December 14, 1999, and to revisit the Annexation Agreement.

On page 25; paragraph 2 under Wastewater Treatment, it states, “Funding associated with the expansion has been committed by the developer”.  So when the Planning Commission met in 1999, they purposely put that statement into the text, implying that, in planning for the future (which is what the commission is dealing with),it was expected that the developer, Brown and Root/Richard S. Foster, would fund future expansion of the wastewater plant. Why would the Cape Charles Planning Commission make this claim, if not true? A bigger question, why was this language stricken from the current Comp Plan, and not included in the current proposed changes? Why not pursue the developer to pay? Why would members of the town staff and council, attempt to shield Bay Creek entities from the obligations that were agreed upon so many years ago?

Also, note the pages extracted below from the Report on the Town of Cape Charles – County of Northampton Annexation Action – February 1991.  TERMS AND CONDITIONS OF ANNEXATION: page 63 Utilities. The Northampton Court Order, Law # 27 specifically addressed the Utility Section in its Order.  There were 2 actual Orders.  One by the special court on the Annexation and the other by Northampton District Court.  The obligations ‘run with the land’, yet interestingly were never included on any title abstract work done for the benefit of Bay Creek Realty/ VAB etc. or by its owner’s (Foster & Sancillio) title companies. 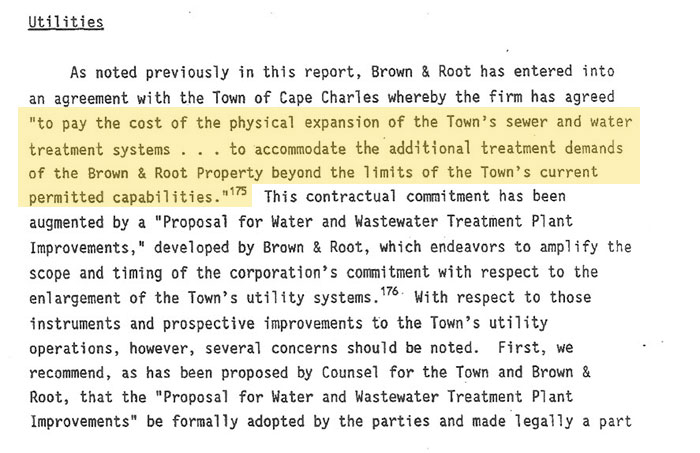 To add to the Jungian Effect, Assistant Town Manager Bob Panek, at last week’s work session, off handedly mentioned that the town was looking to spend funds to attempt to address the massive erosion at the north beach area. The erosion is more than likely being caused by the storm drain outfall – this was reviewed for action many years ago, but the Town did nothing to address it. On page 50 of the 1999 Comp Plan, this issue was noted here:

“The storm drain outfall has also had a local impact on the very north end of the beach.  The public beach is bordered on the north by a large storm water outfall pipe that extends about 300 feet from the bulkhead into the Bay.  The pipe was installed as part of the 1988 beach nourishment project and subsequently has been reinforced with gabions including gabion spurs on either side.  Presently, the outfall has a local effect on the public beach by partially blocking sand moving south along the shoreline from King’s Creek.  The outfall and associated spur are also causing an alternation in the beach platform to the immediate south.”

Is Jung correct, are these events connected by causality and by meaning? Or is it closer to Sigmund Freud where he developed the concept of repressed memory. Is that what has happened here, has there been a 25-year collective memory loss on the obligations contained in the various Annexation Agreements? The language was stricken from the Comprehensive Plan for a reason, and was only meant to benefit a few individuals. The makeup of the town staff, as well as those serving on Town Council at the time the 2009 version was written, may be something worth revisiting. Fast forward to 2015, how long are the citizens of Cape Charles going to be content with the Plum Street smoke and mirrors financial numbers, statistical lies, the bogus wave studies, and fraudulent narratives, all meant to benefit a specific part of the Cape Charles topology, at the expense of all others?

Many are hoping that these agreements will disappear into the mist of time – will be forgotten. This spring, we will see Bay Creek attempt to field more candidates in the Town elections…the hope being to galvanize The Agenda, and seal this crypt forever…reviewing the 2009 Comp Plan, it may be time for the rest of us to go back to the future.