Financial reports for the Town of Cape Charles point to robust growth in almost every sector, however the town harbor continues lag, and has been a cause of concern for Councilman Bennett and Buchholz. While no one has been able to confirm any form of causal relationship which might be fueling the downturn, recent finger pointing has promoted the notion that adverse wave action created by prevailing south westerly winds off the tumultuous Chesapeake Bay is responsible for driving customers away. In comments, Bennett again promoted the idea of bringing in an outside management firm to take over harbor operations. 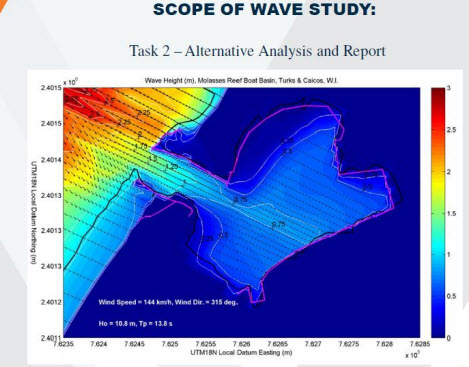 Town Council approved a new $28,000 wave study to hopefully pinpoint the cause of the harbor’s downward slide. The study would “recognize the three existing breakwaters and include a cost-benefit analysis of the various harbor protection alternatives.”

Langley & McDonald, which is already under contract with the town, has proposed a change order to the consulting contract with the Town for the new wave study. Council was briefed on this proposal at the Special Meeting of December 7, 2017.

Five alternatives will be evaluated. The addition of an additional southern breakwater as well as modifications to the existing jetty will be part of the study.

The Delft3D Modeling tool will be used for the wave study model.

SWAN is a third-generation wave model, developed at Delft University of Technology, that computes random, short-crested wind-generated waves in coastal regions and inland waters—this model will be used for the harbor study. SWAN is usually used when designing engineering structures such as breakwaters, storm surge barriers or levees–coastal engineers often need high-quality, detailed wave information as represented by the significant wave height, wave period and mean direction or the two-dimensional wave spectrum.

2016 USGS bathymetric data of the Chesapeake Bay will also be used.

A start date and time frame for the study has not been confirmed at this time.