VIRGINIA BEACH — Although the severity of the summer mosquito season in Virginia and the rest of the United States remains to be seen, the Centers for Disease Control and Prevention has already issued worldwide travel warnings for pregnant women.

Zika, a virus that can be spread through mosquito bites and can impact pregnant women and their unborn babies, is very likely to pose a threat again this year.

There is no vaccine against Zika, and there’s only one way to avoid the virus, said Dr. Nancy Khardori, chief of Infectious Diseases and professor of Internal Medicine at Eastern Virginia Medical School.

“The only way is to avoid mosquito bites by both the wife and the husband,” she said, adding that the CDC website provides a list of mosquito repellants that are safe for use by pregnant women.

The Zika virus is spread via the bite of an infected Aedes species of mosquito (either aegypti or albopictus), which is abundant in tropical climates. Once bitten, a pregnant woman can pass the virus on to the fetus, possibly leading to birth defects.

One of the scariest things about the Zika virus is that it can be spread from an infected male to his pregnant female partner via sexual intercourse.

“After returning, they should seek medical advice for any symptoms at the earliest time and make doctors aware of their recent travel history,” Khardori said.

The CDC recommends that couples who are expecting temporarily refrain from sex or at least use a condom if the male partner has recently traveled to areas where Zika is endemic.

Zika is historically more common in the Caribbean, Central and South America, and parts of Africa than it is in the United States. 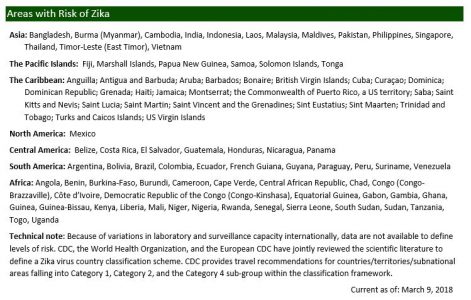