Special to the Cape Charles Mirror, Chas Cornweller responds to a comment by Ms. Anna Teele “To Deborah Bender, what’s keeping you there??”, which was a response to a comment by Debbie Bender on this story, “Give Me 5 Reasons to Move to Cape Charles? 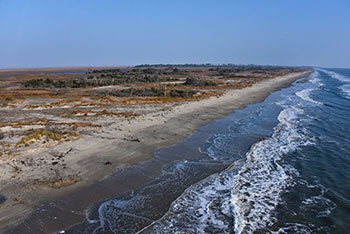 Ms. Teele, I would like to answer that question. And Ms. Bender, my apologies, I do not presume to speak for you. But I think I know how to answer this. First and foremost, I believe that Ms. Bender’s husband has lived on the Shore all his life. Secondly, anyone born and raised on the Shore has a very difficult time leaving it. Ever, period. Most folks leave the Shore on the day they leave for college. So, the transition is very easy for some at first. It becomes a life changing decision (much like for folks who choose to move to the Shore) and is made sometimes by a job offer or business proposition which carries you further from home. But, quite honestly, Ms. Teele, the Shore never is truly taken out of or away from you. If you grew up on pristine creeks and marshes and walked the fields and wood lands and fished the bay during your youth, you never forget. And folks who remain lifelong Shore-folk, not only retain that communion with the land and its surrounding water, but become ever vigilant against the kind of people who tend to do harm to that land and water. I can only imagine Ms. Bender’s frustrations at dealing with a handful of folks who were not raised in Cape Charles and who in less than a course of a generation have tried to turn a small sleepy town into a resort wonderland. Of course there are going to be tensions. And the fact of the matter is, they’ve done very little to improved and maintain a crucial infrastructure vital to that town, but in the meantime have created a very large tax debt for themselves and the folks who were there before them. So, combined with bungled political non-sense and a threatened eco-system, you have some folks who truly just do not understand the ways and conditions of the typical Shoreman/Shorewoman. When it comes to the ways of the land and the water, you do not trifle with it. And to most Shore folk, you don’t walk away from it either. Ms. Teele, I hope I have brought some clarity to your question. Ms. Bender, I hope I am not out of line here, when I say please, stay and fight the good fight.