SILVER BEACH, Va. (AP) — Cleanup crews have begun picking up thousands of dead or dying menhaden fish that washed up on a Chesapeake Bay beach in Virginia. 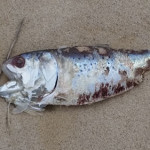 Local news outlets report that the fish spilled after a fishing net on a bait boat ripped open Tuesday morning off Silver Beach.
James Kellum, the fishing boat’s owner, says the tear in the net was an accident. He says about 2,000 bushels of fish have washed up on the bay.
The Virginia Marine Resources Commission says Kellum reported the spill immediately and has hired cleanup crews to begin picking up the fish. The cleanup efforts started Thursday and Kellum says the crews will work for a few days until the fish are gone.

A spokesman for Omega Protein, which has the largest fleet of menhaden boats, said the boat involved did not belong to the company.