Over the last several years, floods have inundated Australian coal mines, creating a worldwide shortage and pushing up prices for coal. Australia is the world’s largest coal exporter and accounts for roughly two-thirds of global trade of coking coal, which is used for steel production.

Oddly, this event from the other side of the globe is having its effects here in Cape Charles. With Australia out of the picture, American coal mines have had to take up the slack. If you gaze upon the western horizon, you will see up to 25 collier ships dotting the horizon—these ships are waiting to pick up orders of coal from Norfolk and Newport News.

Another reason the ships are now anchored off of our beaches is that a previous anchor on the other side of the CBBT was reclaimed by the Navy for testing and training. The ships had to go somewhere while they waited for coal, the deep water outside of Cape Charles is where they have gone. 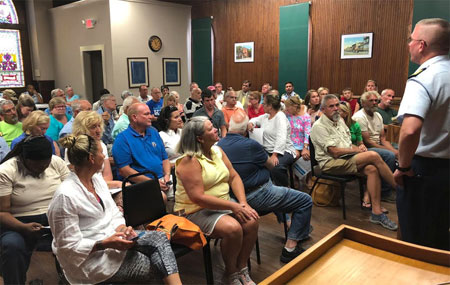 The US Coast Guard briefed this detail to crowds at the Cape Charles civic center on Tuesday. They also attempted to explain the reasoning behind wanting to create a new anchorage. As it stands now, ships can anchor anywhere they want. The Coast Guard would like to limit the area of available anchorages as a way for the Captain of the Port to be able to safely control movements in and around this portion of the bay. The USCG has proposed a pentagon-shaped area three miles offshore from Cherrystone Creek to Plantation Creek, which is further away from local beaches and may ease the viewshed issue.

Despite these efforts, there was still pushback from citizens and local government. Tuesday evening, the Northampton Board of Supervisors hastily passed a resolution against the proposed anchorage. The resolution specifically takes issue with the discharge of ballast and sewage water. Many fear that the aquaculture industry will be harmed by the presence of these vessels if they discharge into the bay. While treated sewage is currently permitted to be discharged, ballast water is already regulated.

Current U.S. Coast Guard regulations require open ocean exchange of ballast water (flushing of ballast tanks 200 miles offshore and refilling with ocean water). This minimizes the potential for contaminated water from foreign ports being discharged because the ballast that arrives in the U.S. is mostly relatively clean open ocean water with very low levels of nutrients and toxins if any.

The Environmental Protection Agency has similar requirements for ballast water and other discharges from ships under the Vessel General Permit, and both the USCG regulations and EPA permits involve inspections and monitoring of ballast water discharges.

Part of the resolution calls for making this portion of the bay a no discharge zone. The Cape Charles Town Council has also tasked its staff with drafting a similar resolution.

There are many contributors to pollution in the Chesapeake Bay, but the maritime industry is heavily regulated both nationally and internationally in an attempt to help protect the environment. The reality is, these vessels are businesses, and they are managed by professionals. They are already required to replace ballast water outside the EEZ, and most, if not all will flush sewage holdings at the same time (these are generally small crews, 10 to 20. How much sewage are they really generating?). They understand the politics around the Chesapeake Bay, so they avoid discharging even if it is treated. As a business, why would you invite the trouble if you are caught discharging into the bay? Once this happens, you get on the list, and the MIFCs start tracking your every move, and you will probably be boarded every time you come to the US. Who wants that hassle when you can legally discharge everything in international waters. Anyone that has worked in or around maritime traffic will confirm this.

There has also been an effort to conflate the beach closings with the vessels anchored offshore. As can be confirmed by the Virginia Department of Health, the beach closings are tied to high rainwater events. The beach contamination is caused by runoff.

Ironically, while everyone in local government is fretting about the effects beach closings have on tourism, tourism, tourism, did they really think you can add two to three thousand more people to the town and beach, and there wouldn’t be consequences? Let’s face it, you have people urinating, defecating and changing diapers right in the water, they walk their dogs at the beach, which pee and poop also. Not to mention all the extra waste that the underperforming wastewater plant has to handle. It should be noted that over that last several years, the plant has been hit with fines totaling several hundred thousands of dollars for being out of compliance. The town had been publishing weekly test results from the plant, which showed large spikes in phosphorus and nitrogen; the town has recently stopped publishing those reports.

If you are on a quest to find point source pollution, it is probably the town itself. A study by a Virginia Tech team found that humans are responsible for 24 percent of the bacteria in the Anacostia and 16 percent of the Potomac’s, whether the source is a broken septic tank or the large sewage overflows during heavy rains. It seems we have similar problems here on the Eastern Shore.

You may also want to look at the out of control deer population, as well as geese, muskrats, raccoons and other wild animals. Bacteria such as E. coli and other fecal coliforms are found in both human and animal waste.

Livestock is also a major problem around the area–manure washes out of pastures and the farm fields where it is spread as fertilizer.

While colliers anchored offshore provide a convenient rage event for our purported environmental experts, they are really the least of our problems. The world coal situation will probably stabilize in one to two years, so we will see far fewer ships on the horizon when that happens. In the meantime, maritime traffic will continue to do just what it has been doing since the time of the Phonecians. It may be in our best interests to let the Captain of the Port, the people that actually understand maritime traffic do what they need to do.

Now might be the time to discover, and try to manage what is really causing your problems.