Since the town of Cape Charles has announced plans to spend $1 million dollars to complete the Cape Charles Community Trail, which, once it extends south to Peach Street could eliminate over 25 parking spaces in the commercial district, it may be helpful to look back on the historically fraudulent and marginally illegal activities that have led to the implementation of this project. Given the many needs our community faces, funneling these funds into what on all accounts appears to a pet project favored by a cloistered few, seems highly questionable. At a local level, the trail project has been hampered by poor decisions, basic incompetence, and fraught with waste and abuse, however, none of this could have occurred without the knowledge, and tacit approval of the Virginia Department of Historic Resources in Richmond.

While the bumper sticker slogan of the VDHR is historic preservation, the landscape and environment they provide appears to be nothing more than trough of corporate welfare for dubious entities to belly up and feed on, using historical tax credits as the slop. What they generously refer to as revitalization, is actually nothing more than scaled gentrification. The important thing to note is that, of all the millions of dollars the VDHR has doled out to private developers, we have not been able to find one instance where tax credits have been used to revitalize a building that would benefit the public, such as revitalizing a library or community center that would remain in the public domain. Here in small town USA Cape Charles, they were alerted that the Trail Project, as well as the Old School Project, was not preserving anything at all, but instead actively destroying it. While they are providing a robust feeding trough for developers, they did so by taking assets away from the poor and underserved.

As the old school’s historic gymnasium and one of the oldest theater stages on the Shore has been cut up for cheap, low bar apartments, it may be helpful to quickly review the timeline that led to this anti-preservation effort:

1912 – School was built – At the time it was built the school faced Park Row which ran beside the town’s Central Park. Eventually the school took over the road property and it became part of the school’s holdings. The school also used the park for its play fields.
c. 1950s – According to the application for tax credits submitted by Cape Charles for the developer the permastone was added at an unknown date. Pictures show that is was on the building in the 1950s. According to town residents the permastone would have been added at around 1957. It is being treated as an historic part of the building and does not have to be removed.
1993 – The building ceased to be used as a school and became the town’s municipal community center per town zoning ordinance.
Definitions from Cape Charles Zoning Ordinance:

10/16/2007 — Cape Charles Community Trail Phase 1A and 1B application
11/18/2008 – Form EQ 104 section 4(f) and section 6(f) responses:
Individually eligible property — no
Contributing element to Historic District – no
Cultural Resources
Source: A letter from VDHR dated 8/7/2008 ruling
Effect on Historic Properties – No adverse effect
The letter states: “Thank you for submitting additional information on the above referenced project to our office for review pursuant to Section 106 of the National Historic Preservation Act.”
Outline here: http://www.achp.gov/106summary.html
12/5/2012 – Wayne Creed, President, Old School Cape Charles sent a letter to the Advisory Council on Historic Preservation in which he asked for assistance resolving the conflict over the “adaptive reuse” of the old school.

The town had falsely claimed that there were no significant or contributing structures in the area of the multi-use trail for which the town sought funding and approval from the VDHR.
The town demolished historically significant features in front of the school (flagpole and stanchions) and sold the property that is supposed to be the trailhead to a developer for $10. The important issue here is that, according VDHR regulations, you cannot alter historically significant features in front of any structure that has been deemed historic. However, the Preservation Certification Application submitted clearly states that the front of the school is the south side (23 Park Row), which contained the flagpole, stanchion and stone circle, which town crews removed for the developer, J. David McCormack:

The Preservation Certification Application states something different, that the front (façade) is on the south side of the building (23 Park Row),

McCormack’s design for the adaptive re-use of the old school, however, required that a parking lot for the apartments would be built where the flagpole and stanchions were located. In order to do this, the ‘front’ of the school had to be changed from 23 Park Row to 423 Plum Street. However, as previously noted, the Historic Preservation Certification Application states something different, that the front (façade) is on the south side of the building (23 Park Row), and not the east side (423 Plum). See image of plans for the trail by Land Studio, with sticky note to label it ‘Map for 23 Park Row, Cape Charles, VA’: 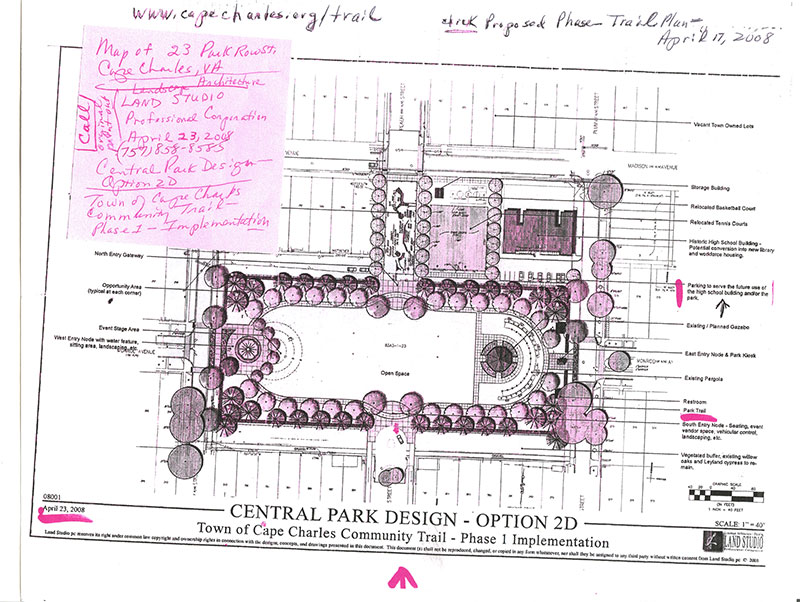 Plans for the trail, provided by Land Studio, with sticky note to label it ‘Map for 23 Park Row, Cape Charles, VA’

Although we have made numerous FOIA requests, we have been unable to find out when the school property’s address was changed from 23 Park Row to 423 Plum Street and we have not been able to find any records of the removal of the flagpole and stanchions.

These are things that should have been addressed when the VDHR was asked to approve the trail plan, as well as plans for the old school. Since several months of correspondence occurred between citizens of this town and the VDHR, including with top officers Julie Langan and Elizabeth Tune, the VDHR had to have been fully aware about those historic features (including the historic gymnasium and stage inside the school), and they should have required that they be preserved. That is, if they had adhered to their core mission, the “stewardship of Virginia’s significant historic architectural, archaeological, and cultural resources“.