The Cape Charles budget was approved last week by Town Council, and residents will be facing a wastewater bill of $63.07. Combined with a water rate of $30.21, monthly bills are running well over $100.00.

Why are the rates in Cape Charles this high given the rural nature of where we live?

The gouging of citizens once again has its roots in the failure of the town to pursue the annexation agreement with Bay Creek South, LLC.

In 2013, the original rate hike occurred after the town stopped pursuing the developer to pay for the new wastewater plant, and constructed it themselves. The rate hike in 2013, $35.45 to $60.85 was needed to meet the debt service on the new sewer plant.

In the early 1990s, Texas-based construction company Brown & Root purchased land that might have been leveraged to accommodate offshore drilling. When that did not materialize, Plan 9 from Outer Space was to develop a local tract of land called “Accawmacke Plantation”.

Having hit hard times, the Commission on Local Government in a 1991 report noted that the Brown & Root planned development would provide Cape Charles an economic shot in the arm while giving the developer access to town services—a win/win for both.

In the report from the commission, they wrote, “Brown and Root have predicated its development plans on the incorporation of all its property into the Town of Cape Charles and on the expansion and utilization of the Town’s utility system. To this end, Brown and Root has entered into an agreement with the Town by which it has committed itself to supporting the proposed annexation and to investing its resources into an expansion and enhancement of municipal facilities.”

In 1991, the Town of Cape Charles annexed the property which is now Bay Creek.

While everything seemed on the up and up, part of the Annexation Agreement required the developer to do some things. Importantly, they were to submit a permit to the State Water Control Board for the initial expansion of the wastewater plant. This was supposed to be submitted within 90 days of signing the agreement.

The developer, of course, did not submit the application, and of course, the town did nothing about it. By the time Brown & Root sold the property to Richard “Dickie” Foster, none of the required improvements to the wastewater plant had been undertaken.

Those agreements found in the annexation agreement then fell on the new owners, “The obligations of Brown and Root, contained herein . . . shall run with the land and be binding upon the subsequent owners of Accawmacke Plantation, which owners shall assume all of the obligations and relieve the prior owner thereof.”

The town and Bay Creek kicked the can down the road until 2008, when the DEQ alerted the town that it would have to, under the Clean Water Act of 1972, reduce effluent levels being poured into the bay—they would need to build a new plant to meet those requirements.

The project fell on the shoulders of the assistant town manager Bob Panek.

Seeing the financial clouds gathering, the town began an effort to get Bay Creek to pony up what was agreed upon in the annexation agreement—pay its share to upgrade the plant.

In a letter sent to Steve Bennett, the then-Construction Manager for Bay Creek, the town gave Bay Creek two options, a bulk payment of $21 million, or $9 million along with water connection charges of almost $11 thousand.

Bay Creek balked, and the town threatened to begin invoicing them beginning in July 2008. An invoice of $42,000 was sent but apparently was never paid.

In January of 2009, then-Mayor Sullivan sent a letter to Richard Foster stating why the town believed Bay Creek was obligated to pay its share of the wastewater treatment plant capacity expansion:
You state in your letter, “I want to understand what you expect of me? What “movement” are you looking for?” In short, I expect you to pay the bills for the Bay Creek share (34%) of design and construction of the new WWTP as they are rendered by the Town. After application of anticipated grant revenues, we expect the Bay Creek share will be about $3.5 million to $4.5 million. As indicated in our September 12, 2008 letter, absent these revenues the Town will need to consider downsizing the WWTP to minimize the financial risk to existing wastewater customers. This will result in significantly higher costs in just a few years, as noted above, to build capacity beyond 250,000 GPD. The greater portion of these higher costs, 68%, will fall to Bay Creek. 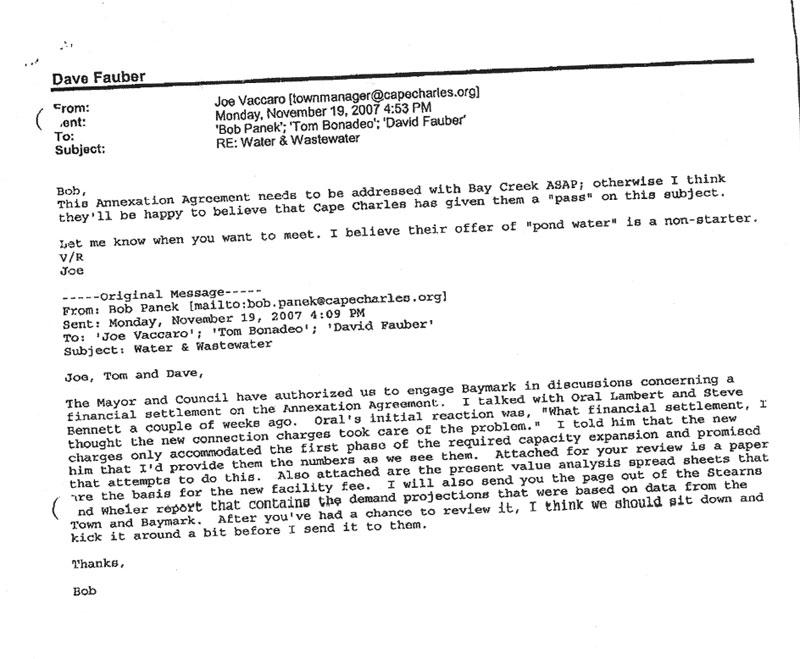 At this point, the town appears to have given up on getting the money from Bay Creek and turned to builders and citizens to extract the needed cash.

A letter from Mayor Sullivan noted, “owners of unimproved lots, residential buildings without connection, and commercial buildings” would be getting the increases starting July 1, 2009,
“These charges have been increased to fund the cost of providing future water and wastewater system capacity.”

As you stare blankly at the at the numbers on the current budget sheet, and you wonder why the utility rates are so exorbitant, it is because you are paying on the debt service for the wastewater plant. You were not supposed to. Most communities would be outraged over this, but here in Cape Charles where most everyone has been lobotomized by wine and golf carts, they are content to just bend over and smile. Or as one citizen commented, they are too busy enjoying “our resurgent town”. So it goes.

Like the Loch Ness monster and Big Foot, one of the strangest mysteries is the case of the vanishing annexation agreement. From 1991 until 2008, it existed. Then suddenly, it just disappeared. Maybe someday Bob Panek, Dora Sullivan, Steve Bennett, Joan Natali or Chris Bannon can enlighten us on its sudden disappearance.

Oh, and one more thing. The annexation agreement is a legislative act of the State of Virginia, Law No.27. Willingly failing to abide by its stipulations is a crime.

Less we forget the connector road, also to be paid for by Bay Creek South, LLC.