Adaptive reuse is the process of examining structures that have become disused or abandoned, and imagining how those buildings might creatively serve new purposes. In many cases this can help communities conserve resources as well as important historic landmarks. This can be a standard way to preserve a building’s past while supporting the present and innovating for the future.

According Caroline Bott, Economic Development Coordinator for the Accomack-Northampton Planning District Commission, the A-NPDC received a grant from the VA Dept. of Housing and Community Development to look, in part, at adaptive reuse of the Machipongo facility. As part of the grant, they have contracted an indoor environmental risk assessment of the building along with a study of the current septic system. The final reports are anticipated by April 14. This information will be presented to the Board of Supervisors along with any adaptive reuse business plans that are developed during the grant period (ending June 16, 2017). 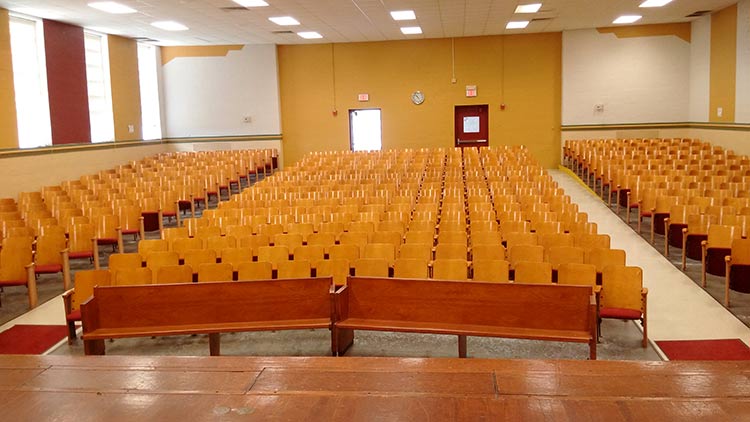 The two potential reuse ideas that were identified in the grant were a small business incubator and a community commercial kitchen; however, at an initial stakeholder meeting multiple other adaptive reuse ideas were shared by community members, including use of the auditorium and other potential performance spaces, such as the band room. The auditorium is one of the few areas or the Machipongo facility that has independent heating and air conditioning.

According to County Administrator John Andrzejewski, “The County is considering re-purposing the Middle School facility. A number of issues exist that need to be addressed including air quality, the availability of restroom facilities, and the condition of the roof. There is a grant administered by the PDC that provides some funding to assist in the evaluation specifically the air quality. There have also been public discussions and a meeting where potential uses have been suggested. The County’s goal is to find a use that can generate enough revenue to support the operation of the facility. We do not view this as a money making endeavor; but at the same time, we are unable to financially support any additional costs related to extended use of the facility.”

Anyone interested in use of the auditorium should contact:
Chris Thomas – Director of Public Works & Operations
Phone: 757-678-0414