NMFS Press Release – Every few weeks for the next few months, a pair of ocean drifters, one surface and one deeper, will be deployed from a ferry north of Grand Manan Island in the Bay of Fundy. Both will be tracked as part of a project to monitor the flow of water in and out of the bay and perhaps into the Gulf of Maine, providing insight into harmful algal blooms in the Gulf of Maine. 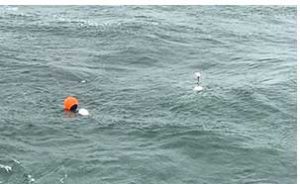 Harmful algal blooms, or HABs, are caused by some species of marine plankton that carry toxins harmful to people and other animals. Shellfish feeding on the plankton can concentrate the toxin in their flesh, and if people or animals eat affected shellfish they can get sick or even die if concentrations of the poison are sufficient.

There are several types of plankton that can cause HABs in the Gulf of Maine, with the most common Alexandrium fundyense. It produces a toxin which can cause outbreaks of paralytic shellfish poisoning (PSP). Blooms of this organism lead to closures of shellfish beds to protect human health. Social and economic impacts occur each year from the blooms and closures, resulting in millions of dollars in losses.

The goal of this project is to better understand the role of the Bay of Fundy gyre, a large system of circular currents formed by global wind patterns and forces created by Earth’s rotation, in regulating blooms of Alexandrium fundyense in the region. The resting stages of the organism, known as cysts, are abundant in sediments underlying the Bay of Fundy gyre. When condition are right, the cysts germinate and swim upward into well-lit surface waters, where the gyre retains them and they grow and mature.

However the gyre has “leaks” that send water out into the Gulf of Maine coastal currents, potentially transporting the Alexandrium fundyense cells to the south and west along the coast of Maine. A key goal of the research is to quantify the “leakiness” of the gyre and its impact on year-to-year variability of PSP along the coast of eastern Maine.

Jim Manning, an oceanographer at the Woods Hole Laboratory of NOAA’s Northeast Fisheries Science Center, is deploying the drifters for a two-year joint project with the Woods Hole Oceanographic Institution (WHOI) as part of its NOAA-funded Ecology and Oceanography of Harmful Algal Blooms research program. Researchers have developed models to forecast the annual severity of the blooms and provide weekly forecasts of bloom location and magnitude. These models are becoming operational and will be refined using data collected from a variety of instruments, including Manning’s drifters.

“A local ferry agreed to let us deploy the drifters. We put the first pair out on May 25, and just launched the second pair on June 7. We will launch a pair every few weeks into late July, which is the prime time for these blooms,” said Manning, who has worked with WHOI researchers in the past. Canada’s Grand Manan Island is the largest island in the Bay of Fundy and is close to the border with Maine.

Manning has been building drifters for years, refining the materials to be increasingly environmentally friendly and low cost, and teaching others how to build them and use them for a variety of research and education purposes. Information from the drifters helps oceanographers ground-truth ocean circulation models and helps scientists answer specific research questions, as in this case on HABs.

For this project, he is working with colleagues at the Gulf of Maine Lobster Foundation in Kennebunk, Maine and the University of New Brunswick in Canada to prepare and deploy the drifters. The deeper drifter, called a holey sock drogue, is a circular hollow tube with holes along the sides. It is weighted to sink to ten meters (roughly 33 feet) deep. The surface drifter, sailcloth panels in a cross pattern attached to an aluminum frame, has a satellite transmitter on top of the mast. With just a small part of the mast above the water, it drifts with the surface currents, relaying its position back to Manning’s lab.

The information collected will help determine if there is indeed a “leak” in the gyre that is sending water into the Gulf of Maine, and along the coast. That data will help refine the circulation models for the Gulf of Maine and the models for forecasting HAB blooms, which in turns helps shellfish harvesters and seafood dealers plan and prepare for blooms. Coastal shellfish resources are monitored regularly by state agencies to avoid harvesting of contaminated shellfish.