Several years ago, while working for the US Army out of Ft. Belvoir, our team was tasked with aiding Ft. Bragg in the creation of a geospatial database comprised of known locations where the endangered red-cockaded woodpecker, or the RCW as it was named by the Army, was living. Ft. Bragg was and still is a major troop training facility, and the Army wanted to be sure that exercises did not conflict with areas where the RCW was still surviving

Fast forward to 2017, and conservation partners are celebrating the first successful breeding of the endangered red-cockaded woodpecker within the Great Dismal Swamp National Wildlife Refuge. This story in William and Mary news by Bryan Watts notes that “two young woodpeckers were banded on the 20th of May and flew from the nest cavity during the second week of June. This event represents a milestone in an ongoing effort to establish a breeding population within the refuge. A total of 18 woodpeckers were moved into the site during the falls of 2015 and 2016 by a broad coalition including several units of the U.S. Fish and Wildlife Service, the Virginia Department of Game & Inland Fisheries, The Center for Conservation Biology, The Nature Conservancy, and many volunteers.”

The red-cockaded woodpecker was placed on the federal listing as endangered in 1970. 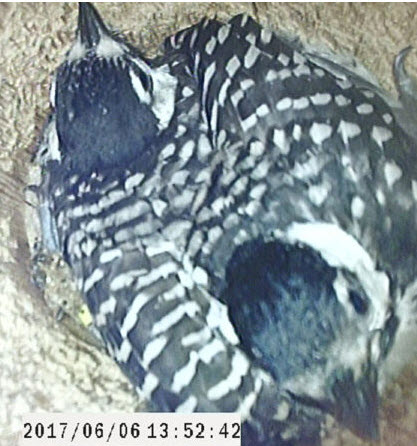 Red-cockaded woodpeckers were once considered common throughout the longleaf pine ecosystem in the deep south, until it disappeared from much of its original range because of early (1700’s) European settlement, widespread commercial timber harvesting and the naval stores/turpentine industry (1800’s). Early to mid-1900 commercial tree farming, urbanization and agriculture contributed to further declines.

Efforts to save the species on the only remaining site (the Piney Grove Preserve owned by The Nature Conservancy) have stabilized and increased the population to 14 breeding groups. “However, there has been ongoing concern from the conservation community about the risks of relying on a single site that could be destroyed by a hurricane or other natural disaster. Establishing a second breeding population within the state has been a stated priority for more than a decade (read more about Virginia recovery objectives, Watts and Harding 2007).”

From W&M News, “Red-cockaded woodpeckers in the Dismal Swamp are the northernmost population known. During the run up to the breeding season only five of the eighteen birds that had been moved from other populations remained within the refuge, including two males and three females. All of these birds were isolated from each other in scattered sites. By early May birds had formed two breeding pairs and soon each had laid three-egg clutches. All three of the eggs from the first clutch hatched on 13 May, but only two of these young survived to be banded on 20 May. One of the two birds was grossly underweight, weighing just over half as much as the other bird. A check on these birds when they were 20 days old revealed that they were both doing fine and both were females. The young birds were observed with the adult pair flying tree to tree foraging when they were approximately ten days out of the cavity. The three-egg clutch laid by the second pair disappeared just before hatching (likely taken by a predator).”