EXMORE, VA––Anyone remotely familiar with the dynamic of the Lower Eastern Shore of the Delmarva Peninsula knows that the large-scale industrial broiler houses are being permitted by state agencies or are currently under construction, especially in Accomack County. While the poultry industry is an economic driver in local communities across the regional, issues including a major concern about how to manage the estimated more than 44 million tons of manure that will be generated in the Chesapeake Bay watershed is a major topic of debate. 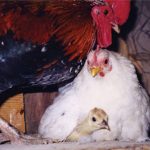 Poultry litter, which is comprised of manure, bedding, and bird carcasses, is historically rich in nutrients such as phosphorus and nitrogen, and is historically used as fertilizer on farm fields within the watershed. Research confirmed by University of Maryland and Johns Hopkins University, however, shows that run-off from nutrients not used by the crops is contributing to high levels of phosphorus and nitrogen in aquatic resources. This can be devastating to the health of the Chesapeake Bay, specifically , and negatively impact aquaculture and recreational opportunities in the watershed.

One of the proposed methods of managing the thousands of tons of poultry litter generated from the ever-growing number of Eastern Shore broiler farms is incineration. In 2011, the Eastern Shore Resource and Conservation District received a large grant to experiment with this technology on a farm in Melfa. Last year, BHSL, an Irish company promoting a technology that burns chicken manure to generate electricity from the resultant heat, was contracted to build a $3 million demonstration project on the Eastern Shore of Maryland.

In December 2016 as part of the project’s promotion, several groups conducted a forum in Onancock on “manure to energy”, extolling the benefits of this method of manure “disposal.” Nothing of substance was presented on the potential negative impacts of the “manure to energy” process.

In response, citizens in Accomack and Northampton counties began to question whether the incineration of poultry manure in a regional air-shed was as benign as was being promoted to the public. They reached out for help from the Socially Responsible Agricultural Project (SRAP), a national nonprofit working in communities across the nation that are fighting the impacts of large-scale animal operations. SRAP’s Maria Payan brought in Mike Ewall, the founder of Energy Justice Network, a Pennsylvania-based group providing information and expertise to communities on the realities of poultry litter incineration and other environmental issues. Ewall agreed to come to the Lower Shore to present his findings to the public and work on this issue.

With support from SRAP and local citizens, this important forum will take place at the Broadwater Academy in Exmore on Wednesday, March 15, 2017 at 7:00pm. The event is free to the public and all interested citizens, farmers, groups and elected officials are urged to attend.