This data was compiled and provided to the Mirror by the citizen group easternshorecog.

Sole Source Aquifer
In 1997, the USEPA designated the groundwater underlying Northampton and Accomack County (except under Tangier and Chincoteague) a “sole source” aquifer. This means that only rainwater “recharges” or replenishes the water we use for drinking and other purposes. Designation of a sole source aquifer means that there is no alternative supply if this resource is depleted or contaminated.
Note our unique system of groundwater was created by a meteor strike 350 million years ago and it is a complex system that is not, even now, fully understood.

There are several layers of clay-like sediments separating our four different sources of groundwater. Between these layers, water is contained and can move slowly within more porous soils. The aquifers are:
1) The surface aquifer, otherwise known as the Columbia aquifer, lies just below the surface and to depths of 60′ or lower in some areas. If this relatively shallow aquifer is utilized at or near its upper limits, it is more susceptible to contamination from pesticides, fertilizers, effluent from septic systems and surface applied manure.

2) The Upper, Middle & Lower Yorktown-Eastover aquifers, which lie under the Columbia, are separated from the shallow aquifer, and each other, by thick layers of clay. These layers act as very fine filters cleaning and slowing the replenishing downward flow enormously. The Upper and Middle Yorktown aquifers are the preferred source for potable (drinkable) water. As depth increases below them, the water quality decreases and becomes “briny”. 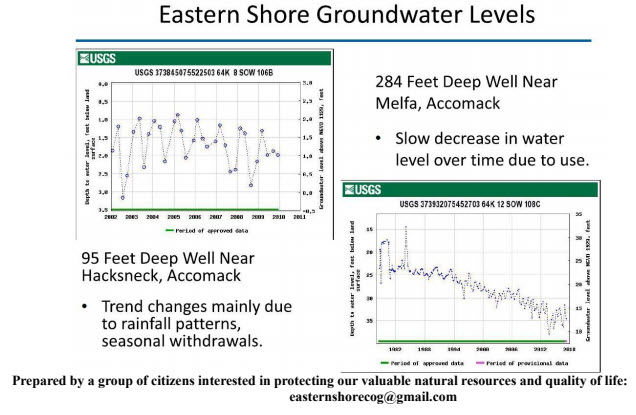 *RECHARGE OF OUR DRINKING WATER

The primary soils that are permeable enough to let rainwater seep into our aquifers lie along the “spline”, or the Route 13 corridor. In this important zone we should discourage any development that creates “impermeable surfaces” such as parking lots that prevent rain water from seeping into the ground. Instead, we should encourage growth in our towns which lie closer to the Seaside and Chesapeake Bay. The following recharge rates should give us all pause for thought about wasting, misusing or contaminating our valuable water resource.

The annual rainfall on the Shore averages 44”, but the vast majority of that water is drained to our coasts through drainage ditches, streams, and creeks. It is also lost to surface evaporation or transpiration (plants). Only 6” makes its way to the shallow aquifer. But only 0.05” of that rainwater recharges or replenishes our Yorktown aquifers. Indeed, when you turn on your tap, you are using groundwater that (in the Upper Yorktown) has been underground for 300-3,000 years and in the lower aquifers could be as old as 10,000 years. The most often quoted statistic, yet subject to debate, is that we historically withdraw on average 10 million gallons/day (gpd) of water from our Yorktown aquifer, but only recharge it (rain) by 9 mgd.

Because of density differences, our fresh water underground “bubble” of potable water “floats” on seawater or saltier resources. So as the Upper and Middle Yorktown aquifers are steadily depleted, areas along the Chesapeake Bay and the Seaside can, and in some instances, are experiencing higher levels of salt in their drinking water supplies. High salt levels in drinking water are unpleasant, can be deleterious to health and not meet the Health Department requirements for municipal use. There is new technology to remove salt from drinking water, and the price of these treatment facilities has dropped over the last several years. Removing even small amounts of salt is very expensive and maintenance intensive.

*THE INDUSTRIAL POULTRY BUILD OUT AND ITS POTENTIAL IMPLICATIONS ON GROUNDWATER

Any potential user of our groundwater slated to use over 300,000 gallons of water each month is required to get a groundwater withdrawal permit from the State Water Control Board [See 62.1-263], an arm of the DEQ and both are currently working on this issue regarding the 250+ industrial poultry broiler houses that are either operating, proposed, or under construction in Accomack County. Note that on paper, the SWCB is directed to protect water for human consumption over “all other uses” if total water supplies are deemed “insufficient”.
However, so far the SWQB has not made that ruling and the poultry houses can and will use the Yorktown, further exacerbating the decline of this critical source. Estimates are that the water use by 83 poultry facilities (multiple houses on one site) in Accomack County needing permits can range as high as 4.7 million gallons/day from our Yorktown. Some estimate that if they are encouraged to use the shallow aquifer for cooling water, this number could come down to 3.2 mgd…still an astounding number!

*WHAT CAN YOU DO?

It is imperative that we encourage the DEQ and the State Water Control Board to live up to their legislative mandate and encourage the industrial poultry users to withdraw all of their groundwater needs from the highly recharged Columbia Aquifer rather than our depleting Yorktown reserves. To make this plea:

Email the director at DAVID.PAYLOR@VIRGINIA.GOV or call 804-698-4020. Also contact your local, state, and federal representatives and attend local Board of Supervisors.