This is a special report to the Cape Charles Mirror by Susan Bauer.

Governor Ralph Northam arrived in Cape Charles Friday morning, traveling in a Virginia State Police helicopter, which landed on the field in Central Park. He was ushered into the Bay Haven Inn, where he was greeted by several town officials. Outside, a procession of dozens of golf carts awaited to escort Northam around town for a ribbon cutting ceremony commemorating the addition of 14 new businesses in town. The event officially began at the south end of the beach, where Northam was enthusiastically greeted by a crowd of people who happily posed for a group photo in front of the LOVE sign. 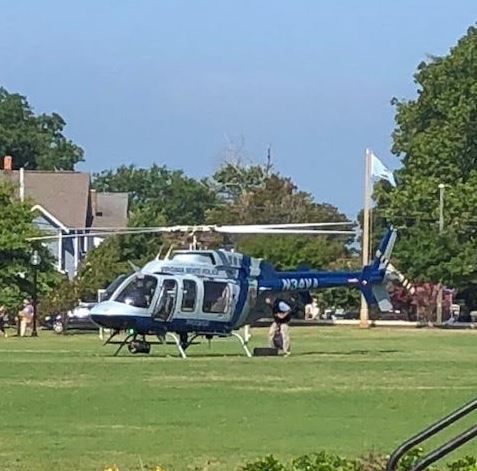 He then hopped on the lead golf cart and made a brief stop at each of the new businesses for handshaking and ribbon cutting with oversized novelty scissors. The businesses featured were:

Governor Northam was met at each business by owners and staff. Brief pleasantries were exchanged, and photos were taken before he and his entourage were rushed to the next stop on the procession. Northam’s approach to the crowd seemed genuine and affable. He took the time to greet as many of his supporters as possible, including the youngest ones, his work as a pediatrician surely giving him a measure of ease and comfort as he engaged with many of the children he encountered along the route.

The final stop for the ribbon cutting ceremony was the Cape Charles Brewing Company.

Numerous local and state officials were on hand when recently elected Cape Charles Mayor Smitty Dize spoke briefly to the crowd before introducing the governor. Onlookers cheered and applauded as Mayor Dize pronounced the event “the largest ribbon-cutting golf cart parade.” It is unclear how many other ribbon cutting golf cart parades were in contention. Dize noted that the addition of the Cape Charles Brewing Company extends business development “farther on Stone Road than it ever has in recent history.” Dize characterized the new businesses as being part of “the vision of Cape Charles,” alluding to the revitalization of the historic district, following the economic downturn of the past decade. 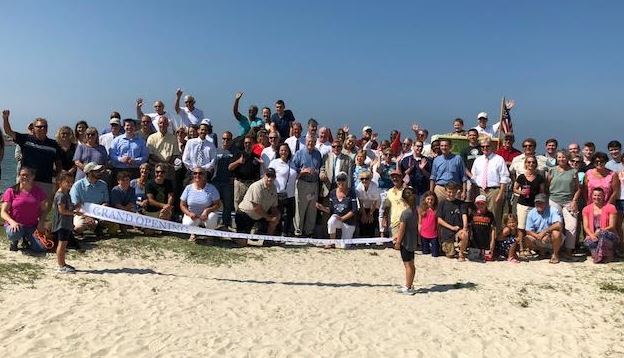 Northam then greeted the crowd by shouting “Hello Cape Charles!” After declaring the Eastern Shore “God’s country,” he joked “I haven’t cut that many things since I’ve been in the operating room.” Northam touted the fact that $80 million in tourist dollars were spent in Northampton County in 2016. The entire event was characterized by an atmosphere of lightheartedness and optimism. There was not much politicking, except for a few subdued protestors who greeted Northam’s arrival with signs stating “Stop the Pipeline.”

Northam did note “it’s not the easiest time to be a public servant, but the most important time.”