There has been some level of excitement around town over the possibility of a brew pub coming to the vacant structure that sits next to the laundromat on Peach Street.  With equipment on the way, and momentum building, a brew pub future was beginning to take shape—except for one thing. When Town Planner Larry DiRe went to examine the Town’s future land use map, he discovered the proposed property was actually zoned R-1 residential; that is, commercial use is strictly forbidden.  What this does to cost and timelines, as well as how it affects the overall viability of the project is yet to be seen. As far as options, the project can apply for a conditional use permit (with no stipulations), or they can wait for the Planning Commission to update the map (if they will).

The big question is how did a building, sitting squarely in the middle of the commercial district, get zoned residential in the first place? On the Historic District Review Board, there was disbelief that this could be true, and all fingers pointed to the Planning Commission, “I can’t believe this, that it could be zoned this way. Something in the commercial district should be zoned commercial. The Planning Commission has some work to do,” Chairman Joe Fehrer said.

Mr. Sample closed the famed barbershop at 309 Jefferson, part of Cape Charles’ ‘Cottage Row’ a little over a year ago, and this important structure (built approximately 1904) has been sitting vacant since then. John Hanson of Parson’s Circle has plans to change all that. Mr. Hanson and his wife applied for a Certificate of Appropriateness to open a mom & pop soda shop, selling hot dogs, snow cones, drinks and snacks in the old barber shop: 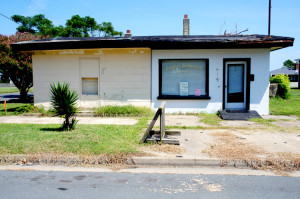 The applicant will be incorporating a brick façade, adding windows and doors, as well as bricking over some existing windows. The overall footprint of the structure will remain the same.  “We want to make everything uniform, try to correct the mish-mash,” Mr. Hanson said. Stucco will be used on portions of the façade to maintain some of the original, historic feel. The applicants also plan keep the old signage, as well as the original barber mirrors as a way of paying homage the historic Cottage Row barber shop.

“I think it will look great,” board member Sandra Salopek said.

The Board approved the application unanimously.

The HDRB had issued a certificate of appropriateness for some modification at this address in April. The applicant wishes to modify the French door part of the application. The board had approved a single door for the second floor porch; the applicant wished to change this to a double door:

The French doors installed on the second floor as part of the approved porch project were not part of the original application. In conformity with the Guidelines, the applicant stated that a door matching the first floor front door would be installed on the second floor. The French doors that were installed were not approved as part of the original application and so do not appear in the language of the Certificate of Appropriateness dated April 22, 2015, but do match the style of the first floor door-Staff Report

“I do respect restorers, but we discussed this in length in April. The double doors throw off the alignment. It is a visual thing that we did approve, to have the single door match the other. We were pretty clear about that,” Fehrer said.

Another issue is a piece of lattice that had been added per request from Zoning Official Jeb Brady. An electrical wire was within reach from the second floor porch, so as safety measure, the lattice was added to the project. It was consensus of the board that the wire should be rerouted and the lattice removed.

The request to modify the certificate was denied.

An application for the addition of a screened-in rear porch for Mollie and Denis Pickron of 501 Monroe was approved.  501 Monroe Avenue is considered a contributing structure on a non-conforming size lot. Although space in the backyard is somewhat limited due to the existence of a detached structure, the size, and permeability of porch allow it to meet standards. Of note, the work will be performed by Scott Sims Construction who has a reputation for high quality editions and renovations in the historic district.

The application was approved.

During last month’s meeting, Board directed staff to research solar panels, and how they might be applied in the historic district. The Board was considering adding language for possible inclusion in the roof section of the Historic District Guidelines. After research, Planner DiRe brought back two documents that went into detail about solar panels, The Secretary of the Interior’s Standards for Rehabilitation & Illustrated Guidelines on Sustainability for Rehabilitating Historic Buildings and The National Alliance of Preservation Commissions Sample Guidelines for Solar Systems in Historic Districts.

The consensus was  rather than add new language to the Guidelines, to instead adopt and add these documents to the Appendix. The solar panel decision was tabled until the board could research procedural options regarding adopting these standards.

Mr. DiRe also informed the Board that the grant application from the Department of Historic Resources for “One-Day Workshop Training” was denied.