In front of a crowd of over 1000, the Northampton Football Yellowjackets put on a clinic, dismantling a game Middlesex squad 41 – 14.

The jackets controlled both lines of scrimmage with dominant offensive line play and aggressive an defensive attack. The line blocking scheme led to a big night for running backs. Landon Sayers, Cory Smith, and Carlton Smith all chalked up impressive, long carries. Unfortunately, the Jackets also had close to 200 yards in penalties, which negated three long touchdown runs. Twenty-eight points were taken off the board due to penalties, including a 60-yard run by Sayers. 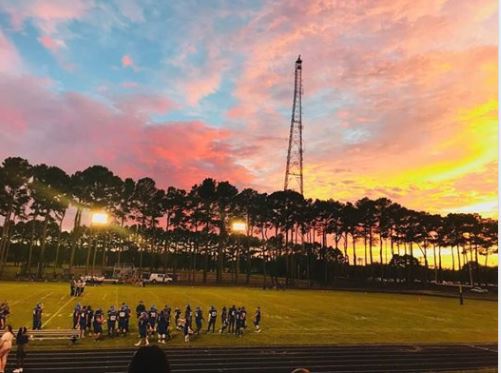 But it was the special teams that really put on a show. Northampton scored twenty-eight off of special teams play. On a fourth and thirty from mid-field, punter Tripp Westcoat fooled the Chargers with a fake, hitting Dustin Splawn for a long touchdown pass.

In the third quarter, the game was sealed when Westcoat blocked a punt, and senior middle linebacker Josh Splawn picked it up and ran it in for a touchdown. It was a great senior moment for one of the Jacket’s top defenders.

It was a classic performance by Northampton, and treat for all the alumni that packed the stands.

Note: At halftime, the crowd was entertained by the incredible Delaware State Marching Band, the Approaching Storm. Sometimes we forget how awesome marching bands can be.

Northampton’s next game is at home against Atlantic Shores, who will be making the trip across the bay from Chesapeake next Friday @7:00.