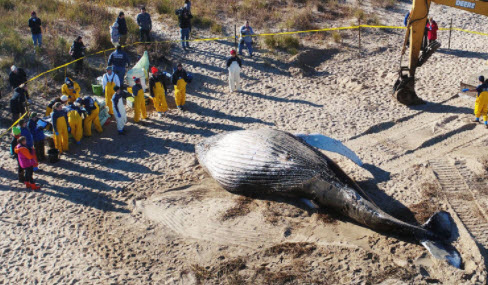 A humpback whale washed up near the Lynnhaven Fishing Pier last Sunday. According to the Virginia Aquarium, the whale was a juvenile female at least 2 years old. It measured 30 feet long and weighed about 6 tons. The aquarium’s stranding response team conducted a necropsy Monday, but causes have not been determined at this time.

The National Oceanic and Atmospheric Administration fisheries declared an Unusual Mortality Event for humpback whale strandings along the Atlantic Coast last April after humpbacks began washing up on the East Coast, beginning with one in Virginia Beach in January 2016. Fifty-seven dead whales have been found since then, according to NOAA.

According to NOAA, 10 of the 20 whales examined through April showed evidence of blunt force trauma or propeller wounds.