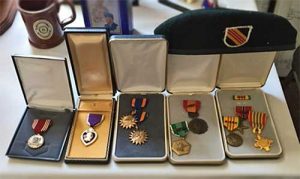 The American Legion’s Department of Virginia commander, the Eastern Shore’s own James Chapman, is hand-delivering combat medals and the green beret of a deceased Vietnam War veteran to his family in Los Angeles Monday. The items, which belonged to two-tour U.S. Special Forces soldier Richard Keener, who passed away in 1988, were discovered in a Goodwill Store in Vinton, Va., in April.

The veteran’s widow, Pat Keener, and family members will be at Bob Hope Patriotic Hall in Los Angeles to receive the medals and beret Monday at 10 a.m. Los Angeles-area American Legion members are coordinating a reunion ceremony there.

Chapman said the medals and beret were discovered by Goodwill Store manager Charlene Allen, a U.S. Navy veteran. Among the decorations were a Bronze Star and a Purple Heart. When she saw the contents of the donated box, Allen immediately contacted American Legion Post 3 Commander Roy Carpenter in Salem, Va. Carpenter then showed the discovery to Chapman and American Legion National Vice Commander Jim Lane during a post revitalization effort in Roanoke, Va.

Lane and Chapman, having seen the name Richard Keener etched on the back of one of the medals, each spent more than 10 hours searching the web for information. They found Keener’s obituary. They made more than 20 phone calls to locate family. “Lane looked up potential relatives’ phone numbers, and I placed the calls,” Chapman said. “I left messages. No response.”

The next morning, Pat Keener called Chapman and tearfully thanked him and The American Legion for finding a way to reconnect her late husband’s war medals and beret with the family. “She said she had not heard a word about Richard in 28 years,” said Chapman, who then reached out to Los Angeles Legionnaires to set up Monday’s ceremony at Patriotic Hall.

“A gracious thank you to those that turned the items over from the thrift store,” Pat Keener explained to Chapman in an e-mail. “I’m so glad they knew they were of great worth to the family.”

Story courtesy of The Legion Magazine