The following comment to the article on the Cape Charles Connector Road: “This road is not a subdivision street. Its need is generated by the need of the general public; not the Bay Creek subdivision. It is appropriate for the State to expend state funds to construct it. Right of way was dedicated for the road; presumably without compensation.
What is the end game? To reimburse the State for its construction? If it was, indeed, the responsibility of the subdivider, wouldn’t it have been “bonded” like other public improvements” , generated the following response and letter from a Cape Charles Mirror reader:

Reading the comment, it seems Mr. Taylor does not have his facts straight. He notes:
“This road is not a subdivision street. Its need is generated by the need of the general public; not the Bay Creek subdivision”. However, Taylor misses the point that the Town determined it needed a ‘connector road’ to provide ingress and egress away from limited town access roads that is why the Schedule of Road Improvement was included in the Court Order for Annexation – did Taylor miss this critical point or just ignore it?

He also states that “It is appropriate for the State to expend state funds to construct it. Right of way was dedicated for the road; presumably without compensation”. The Right of Way was paid for by VDOT.

Mr. Taylor goes on to say, “What is the end game? To reimburse the State for its construction? If it was, indeed, the responsibility of the subdivider, wouldn’t it have been “bonded” like other public improvements.”

Taylor is wrong again. The Subdivider would not have needed to secure any bonds as per state code § 2.2-4337. Performance and payment bonds:

1. A performance bond in the sum of the contract amount conditioned upon the faithful performance of the contract in strict conformity with the plans, specifications and conditions of the contract. For transportation-related projects authorized under Article 2 (§ 33.2-208 et seq.) of Chapter 2 of Title 33.2, such bond shall be in a form and amount satisfactory to the public body.

2. A payment bond in the sum of the contract amount. The bond shall be for the protection of claimants who have and fulfill contracts to supply labor or materials to the prime contractor to whom the contract was awarded, or to any subcontractors, in furtherance of the work provided for in the contract, and shall be conditioned upon the prompt payment for all materials furnished or labor supplied or performed in the furtherance of the work. For transportation-related projects authorized under Article 2 (§ 33.2-208 et seq.) of Chapter 2 of Title 33.2 and partially or wholly funded by the Commonwealth, such bond shall be in a form and amount satisfactory to the public body.

As used in this subdivision, “labor or materials” includes public utility services and reasonable rentals of equipment, but only for periods when the equipment rented is actually used at the site.

B. For nontransportation-related construction contracts in excess of $100,000 but less than $500,000, where the performance and payment bond requirements are waived, prospective contractors shall be prequalified for each individual project in accordance with § 2.2-4317. However, a locality may waive the requirement for prequalification of a contractor with a current Class A contractor license for contracts in excess of $100,000 but less than $300,000 upon a written determination made in advance by the local governing body that waiving the requirement is in the best interests of the locality. A locality shall not enter into more than 10 such contracts per year.

C. Each of the bonds shall be executed by one or more surety companies selected by the contractor that are authorized to do business in Virginia.

E. Each of the bonds shall be filed with the public body that awarded the contract, or a designated office or official thereof.

F. Nothing in this section shall preclude a public body from requiring payment or performance bonds for construction contracts below $500,000 for nontransportation-related projects or $350,000 for transportation-related projects authorized under Article 2 (§ 33.2-208 et seq.) of Chapter 2 of Title 33.2 and partially or wholly funded by the Commonwealth.

H. The performance and payment bond requirements of subsection A for transportation-related projects that are valued in excess of $250,000 but less than $350,000 may only be waived by a public body if the bidder provides evidence, satisfactory to the public body, that a surety company has declined an application from the contractor for a performance or payment bond.
Here is the missing link that the Town overlooks and the County hides from and perhaps misleads the VDOT and taxpayers.

More details on the Agreement

In the Commission on Local Government report – Page 18 notes that Routes 641 & 642 connects because of the “Connector Road”. Which the Commission (The Commission acts on behalf of the State legislature and follows prescribed procedures laid out in Virginia statutes) wanted addressed, and was so addressed in the Annexation Agreement on November 25, 1991.

Bay Creek had its engineers develop a Master Plan 2003 (see image below) which for the first time showed the ‘connector road’. Bay Creek submitted many updated Master Plans since the original one submitted by Brown & Root and Baymark in 1998 as part of the sale agreement between those parties. Why would Bay Creek spend its money to show a ‘connector road’ on its maps submitted to the Town if this was a State problem? 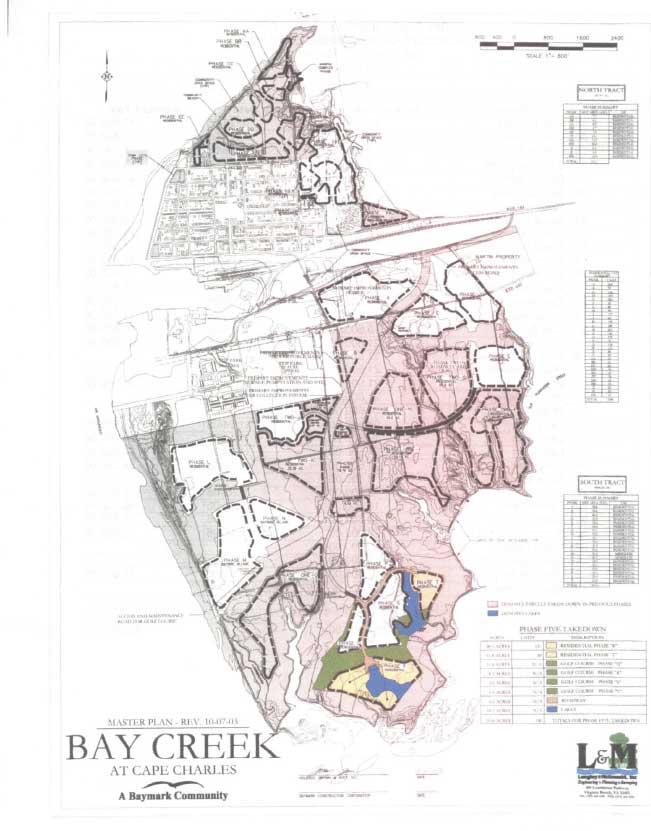 Footnotes from Pages 18 & 19 of the Report offer more details

See Footnotes:( Footnote 49- 0f the 3,000 dwelling units planned for construction in the Accawmacke Plantation, approximately 2,500 will be built in the area proposed for annexation. (Davis, letter to staff of Commission on Local Government, Oct. 16, 1990.)
Footnote 50Ibid. Brown & Root projects that only approximately 40% of the property owners in the Accawmacke Plantation development will be permanent residents.
Footnote 51Ibid. Brown & Root estimates that, based on studies of similar resort/second home developments, only 80-160 students will reside within the proposed Accawmacke Plantation development when completed. Those additional students would represent approximately 3 to 6% of the 1989 average daily membership of the County’s school system

Page 18 – The proposed Accawmacke Plantation will result in the construction ‘of approximately 3,000 single-family and multifamily dwelling units. (Footnote 49)
That planned community, when completed, is expected to provide housing to approximately 2,800 full-time and 4,200 seasonal residents who will be eligible for educational, health, and
social services from the County. (Footnote 50)

However, given the anticipated nature of the residents who will be principally attracted to the planned residential community, the cost to the County for the provision of such
services should be fully offset by its receipt of increased property tax revenue. Footnote 51

There is, however, one other functional area in which the prospective impact of the proposed annexation on the County merits comment. While the proposed annexation would result in the entire
Accawmacke Plantation being brought within the corporate boundaries of the Town and subject to the zoning and other regulatory authority of that municipality, the physical impact of that development will affect the County. In particular, certain public thoroughfares in the Cape Charles area (including State Routes 641 and 642), will require substantial improvement to serve the vehicular needs of an additional 7,000 persons. Unless offset by developer contributions, improvements to public thoroughfares throughout Northampton County (including those with in the (Page 19))
Town of Cape Charles} are funded from an allocation of State funds dedicated for such use in Northampton County.52 As a consequence, any expenditure of State funds for road improvements to serve the Accawmacke Plantation will have the effect of “reducing the amount of State aid available to address other significant road problems in the County. (Footnote 53)

Moreover, it should be noted that the present condition of the State’s economy and the Commonwealth’s budgetary concerns may even result in a reduction in the amount of State road construction money:projected to be available for use in Northampton County during the current planning period. (Footnote 54) In these circumstances, the prospective impact of the proposed annexation on the County’s ability to address its road concerns requires recognition.

A clear reading of the Commission’s Report, the Annexation Order and the Annexation Agreement, identifies Brown & Root (Keyser-Sinclair who agreed to accept these Agreement conditions when it purchased the controlling interest of Bay Creek South, LLC in March 2008 and the remainder of the South Tract properties in May 2014), as fully responsible to construct the ‘connector road’.