In the Walt Disney classic animated film Pinocchio, groups of rambunctious boys are seduced into coming to Pleasure Island, where they are eventually turned into donkeys and forced to work in the salt mines. The “naughty” boys in the film are presented as voiceless and faceless; they are seen in the distance and in sequences where they are bundled together, giving them no humanity at all.  Much like the Lost Boys of Peter Pan, “who fall out of their prams when the nurse is looking the other way and if they are not claimed in seven days, they are sent far away to the Neverland.”

As we witness yet another boy walk back into school and kill, the question becomes, are these our  Lost Boys?

After the Parkland school shooting, the polarized gun arguments began right on cue—mostly black and white, with little room at the center. The method used at Parkland was a gun, but the act had almost nothing to do with guns. Due to our abject political natures, the discussion never really ends up being about the school shootings.

Peering deeper into the abyss of modern humanity, there is something more horrible going on–something that no one wants to look at it. Someone intent on doing evil will find a way. But what possesses them to do these things? Looking further, why are school shootings committed by men, many times young men?

People like Mr. Cruz are possessed by a kind of evil ill will, a state of mind and magnitude of hate that has gown well past the ability to understand or describe it. At its core it is a soul that is alienated, disoriented and overcome by a perceived meaninglessness. The expressions left for this soul present themselves in horrible ways. Most lately with gun violence. In Luchino Visconti’s “The Damned”, the SS officer tells the young boy, “You see Gunther, you have acquired something truly extraordinary. You possess hate! It’s a young hate. Pure. Absolute.”

It’s hard to have an intelligent conversation about school shootings–nobody wants to look into the darkness long enough to actually understand what motivates people like Mr. Cruz. Of course, there are marginal legal measures, but until we can understand this fundamental situation, horrible things will continue to happen.

What we are seeing is young men stuck in lives without a purpose and direction. Life is hard, and tragic; by turning to, using an older term like nihilism, it feeds and drives people like mass spree shooters.

For many, life is suffering. This should not be too surprising. People from Socrates to religious sages have understood how to embrace an existence of suffering. It plays an important role in a number of religions, such as consolation or relief; moral conduct and spiritual advancement through a life hardships or through self-imposed trials (mortification of the flesh, penance, asceticism).

The ‘Four Noble Truths’ of Buddhism are about dukkha, a term usually translated as suffering in the Dharma. Suffering is greatly defined in Buddhism and holds a key role in attaining the supreme bliss Nirvana. Understanding the nature of suffering, its cause, its cessation, and the way leading to its cessation (the Noble Eightfold Path) is the quintessential practice of Buddhism.

Because life is very difficult, you need to set something positive against that suffering, or it poisons you. This poison leads to vengefulness, many times leading to murderous and genocidal acts.

People like Cruz turn against life because life is so difficult, and there is nothing positive to balance it.

An element of this is the way we become ideologues because people lack genuine meaning in their own lives. According to philosophers and religious critics, this happens because we don’t understand how necessary it is to take responsibility. Instead, we flounder and flail about positing one or even a series of pseudosolutions (like gun control, protest marches, #killTheNRA, etc.).
An ideology is not the meaning of a life.

We see so many men from broken homes, growing up without a dad (9 of the recent spree shooters came from fatherless homes). The American culture has somewhat turned against them. How do these boys find meaning as part of a group, when the last fifty years has involved a concerted effort to feminize and eviscerate them? After a shooting, we hear the term toxic masculinity quite a bit.

How do our boys find meaning in their life, when society is at every turn is  messaging them, sometimes even subliminally, saying you’re bad, worthless? You’re not needed.

Since the 1960s, formal criticism has propagated the idea that male competence is indistinguishable from male tyranny and power, so it should be all torn down. 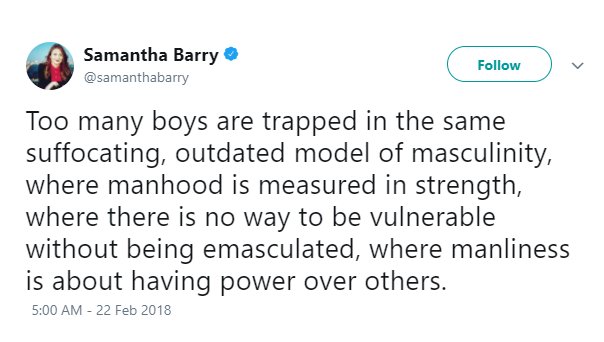 A recent example was an article by Marcie Bianco, editorial and communications manager at Stanford University’s Clayman Institute for Gender Research. She wrote article in 21 NBC News attacking Elon Musk (Tesla, Space X) after his launching a Tesla car into space, where she wrote:

“The patriarchal race to colonize Mars is just another example of male entitlement…These men, particularly Musk, are not only heavily invested in who can get their rocket into space first, but in colonizing Mars.”

“The desire to colonize — to have unquestioned, unchallenged and automatic access to something, to any type of body, and to use it at will — is a patriarchal one.”

Bianco credits Musk with believing that they’re working to “save humanity”, yet, attacks his motivations, “It is the same instinctual and cultural force that teaches men that everything — and everyone — in their line of vision is theirs for the taking…You know, just like walking up to a woman and grabbing her by the p—-.”

Bianco describes Musk’s efforts as “Columbusing,” an “entitlement to power, control, domination and ownership” as well as “the presumed right to use and abuse something and then walk away to conquer and colonize something new.”

Instead of seeing Mr. Lusk’s quests as being something deeply personal and meaningful, and at the same time wonderful for all of us, he is described as being like a rapist.

Ms. Bianco is a brilliant person; however, the point has been driven home for some time. Late history has been all-out assault on the masculine spirit, and in a way, western competence.
If Western culture is perceived as a corrupt patriarchy, then the goal of course would be the destruction of the patriarchy. Boys have had to bear the brunt of this–the kids from Columbine High School, online and personally, somewhat described this sense of being lost and not belonging, a kind of formalized nothingness. Emasculated, weak men are not harmless, but always end up doing the most evil.

In his book, Loneliness: Human Nature and the Need for Social Connection, author Robert Cacioppo notes, the pain of isolation can make us more likely to lash out at the people we feel alienated from, loneliness “promotes an emphasis on short-term self-preservation, including an increase in implicit vigilance for social threats.” In other words, while “a sense of social connectednedness serves as a scaffold for the self, loneliness and alienation, rather than creating a yearning to engage with the world around them, creates a hyper-vigilance that others are out to do them harm, making it less likely they will be able connect meaningfully.

Our boys may be squeezed in the middle of an ongoing culture war, but that should not be the end of it. How do we tell them that it is really okay to be a man, masculinity is not toxic? How to we avoid the outcome of Columbine, and  turn boys like this away from nihilism, and instead make them strong, confident, competent partners?

Back to suffering, fulfillment comes by accepting responsibility for it, for owning the tragic nature of life. Take on more, become someone others rely upon, someone they can trust. Take on burdens that make the world a little better, rather than a little worse. The alternative, the more readily accepted path is to succumb to ideological possession and collective action and group hatred and tribalism. We have recently been hearing the term “right-wing hate” quite often, however maybe everyone needs to take a look in the mirror.

What does it really mean to live a life? Your death ensures that your life will be tragic. Freedom comes from acceptance of life’s intrinsic nature, which is tragic.

There is evil in the world. Understand this, assume responsibility and move towards the light of good. This is an individual, not a group responsibility.

The idea of evil and mass shootings is hard to grasp, but it points to a failure with our young men. Our boys, we need to put on them, and they need to accept as much responsibility as they can. But we need to show them that, as men and adults, over our lives, we have strengthened and built ourselves up into individuals who can take on more responsibility. To accept that, is to accept grace and to find meaning and purpose in life.

Lucy replies, yes, she can cure it for the same nickel.

The hate we see is due to a refusal to accept responsibility for the tragedy of life, and we turn to the gang, the tribe—in most cases this is the political party or a fringe hate group (white supremacists, Anitifa, take your pick). The American political and cultural system has become a tribal battlefield.

To reject tribalism means you must also accept the terrible and awful responsibility, to accept suffering and carry that weight on your shoulders.

How do you justify the suffering? To realize that by accepting the weight and assuming the responsibility, the fuller your life becomes.

Of course, I understand the mockery this will generate. However, Christ’s fraternization with outcasts was interpreted by the Pharisees as an inexcusable compromise with sin; they did not see it for what it really was, an expression of the divine compassion towards sinners. Christ assumed an even larger responsibility a little later
.
Will we ever be able to stop mass shootings? Probably not, and no amount of government regulation is going to stop evil. It will always find a way. It will always find the gun, or knife or bomb.

As America gets bigger and more angry, and the tribes become more entrenched, more and more of our boys will fall through the cracks. It will take more than a nickel to fix this.