The night was not, however, without its surprises, and unexpected bright spots. It came during one of the prepared questions, a rather innocuous inquiry as to whether the candidates felt there was enough to do for the youth of Cape Charles. What followed were the typical stupid responses we are so accustomed to hearing from this crowd. The candidates noted that the town provided ample story times for the kids, there were activities right there at the Civics Center, they even recommended sending them (all) down south for swimming lessons. Oh, Steve Bennett reminded us that there is even a skateboard park–all the typical responses you would expect from people that are not raising a family in this town. Here’s the thing, after a certain age, kids hate activities (at least the smart ones); they are asynchronous, random and playfully obtuse. That’s why they gravitate towards sports and the performing arts, for the randomness and mystery. The skateboard park is a perfect example. No skater with any self-respect is going to be caught dead on that thing…parks are for dogs. Skating is inherently an outlaw activity; you generally look for areas that are posted with signs that say ‘No Skateboarding Allowed’, and then proceed to grind on it.

While almost every other candidate issued well thought out, yet empty and meaningless statements, an odd thing happened. When it was her turn to speak, Nioaka Marshall said, “No, I don’t think we’ve done enough. I think we need to put the basketball courts back. That’s what I hear when I talk to the kids. A lot of them don’t play soccer, and they say there’s no place to play the sport they like. They like basketball…”

Wait, do you mean somebody actually went out into the street, and talked to the people? Actually talked to the kids, and listened to what they had to say? That is shocking. It was all the richer, being followed by former disgraced mayor, Dora Sullivan, who forged the sleazy back room deal with a Richmond developer as a way to finally rid the town of the basketball courts, and the kids that hung out there (mostly African-American boys).

When the candidates were asked what kind of person the town should be trying to attract, Ms. Marshall simply replied, “I don’t know. I have no idea.” Of course, why would she….this is America, right? What, are we going to start having people supply resumes and fill out applications; just to be sure they fit the profile? The rest of the candidates understood which profile was being implied, and Dan Burke said it out loud, “The three types of people we should be attracting are retirees, retirees, and retirees.”  Also implied, preferably white and rich retirees. Yeah, the average age in Cape Charles is almost sixty, so let’s keep riding that trend.

The forum also exposed how the zombie-like Cape Charles Business Association approach to re-animating Cape Charles has grotesquely seeped into every intellectual pore of the pod people; its slithering encompassment of all things Cape Charles is right out of a Stephen King novel. This was obvious during a question about whether the candidates believed in the Main Street program. The answer, aside from Ms. Marshall, was a monotone, head bobbing ‘Yes’. As Steve Bennett noted, “There is still so much more to do!” Really? I guess the candidates didn’t realize this was a trick question. As usual, Dora Sullivan exposed her ignorance of the details by noting that this program was somehow free…uhhh, no. You have to hire people to do this …several people (Executive Director, Econ Director, Marketing, etc.). For us, we’d be looking at well over $100k just to get in the game, and probably more than that to maintain it. And for what exactly?

At this point, I don’t know what to tell you, except always side with truth and authenticity. In that case, Nioaka Marshal is the only vote for you. As for the rest: 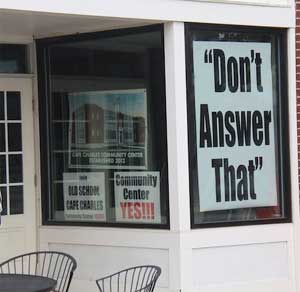 Ms. Sullivan, can you tell us which direction the front of the old school building faces? Come on, you know you can do it!

Dora Sullivan – the homeboys jokingly refer to Ms. Sullivan as the Mistress of Malfeasance. Ask her about the wastewater plant (out of compliance a good bit of time), the town’s huge debt (her crowning achievement), whether she did a background check on high level employees, or why she abandoned the legislative act of the State of Virginia known as the Annexation Agreement. In her comments, she said she always listened to the citizens- ask Old School Cape Charles what they think of that. As a matter of fact, if you want to know all about Dora Sullivan, just ask anyone in Old School Cape Charles. A couple of years ago, she said that she had enough politics to last a lifetime, now she loudly proclaims that politics is her passion. What town asset is she going to try and give away next, all after six months of secret Executive Sessions? Our memories are not that short, we remember how she not only worked in the shadows to benefit certain individuals, but also tried to shut down public dissent when citizens dared question her ethics. A good question for Sullivan? Ask her if she knows which direction the front of the old school faces (see Don’t Answer that Question).

Steve Bennett– Bennett mentioned that he promised never to vote on an issue that he hasn’t researched and done due diligence. If you attend Town Council meetings, you will know this is true. Bennett is almost always the only one that ever asks the hard questions, and seems willing to dig until he gets the answer. On the flip side, he has always been prone to do the bidding of folks like Dickie Foster, and some say now for Southport. He also rode in on the same bus as Sullivan, so he has to own all of that. Bennett also admitted that he is a proponent of bloated government and waste, blithely proclaiming that the town is perfectly staffed, and that there was a ‘vocal minority’ that just have no idea of all the work that really goes into running a metropolis of 800 people. He must mean the same  vocal minority that took the Town to court over the illegality of its actions, a motion which led Bennett and Sullivan to sign off on spending over $100k to hire 3 law firms to silence said minority. Actually, how does he know what it takes to run a massive, complex town like this? Does he ride around all day picking up sticks and smoking cigarettes with the crew? Does he pour chemicals into our expensive waste water plant to be sure it stays in compliance? Really, how does he know?

Andy Buchholz– a smart, good guy who really loves this town, and if elected, would be its top advocate. One knock is that he many times seems like a one trick pony only interested in promoting business interests (Buchholz is a local business owner), sometimes to the detriment of other things. How do you like reverse-angle parking? Ask Andy, he was on the Planning Commission when this was pushed through, so the ink’s on his hands for that one. Oddly, he also made a huge point that if businesses are going to come here we need to ‘fix’ the public schools. Not only is this a naïve and simple notion, it is compounded by the fact that Buchholz never sent his kids to public schools-if he had, he would be aware of all the kids that are thriving at Northampton High. Buchholz is also another Bay Creeker who has already shown a propensity to defend the developer. During a recent Planning Commission meeting, Buchholz made the statement that the expansion of RT 642 only had to do with providing cleaner access to harbor. This appeared to be a shot across the bow to anyone wanting to bring up that the annexation agreement clearly states that expansion of the right of way on RT 642 is to be paid for by the developer. A cursory review of the plans shows that it calls for an 8 ft. expansion of the right of way the entire length of the road. An expansion that will mainly benefit Bay Creek residents.

Note: If you look at the makeup of the Harbor District Review Board, you will find that everyone on it is from Bay Creek. During the last meeting, they even joked, “Hey, everyone here is from Bay Creek. I guess that means we can do whatever we want!”

Dan Burke – Good guy, with good intentions,  great work experience, but probably needs to spend a little more time on the Planning Commission. Needs to live here a little longer before trying to impose his “ideas” on the home boys. Also, his comment that the only people that should be moving to town are retirees may be grounds for immediate disqualification.

David Gay – Also a good guy with a good heart and good intentions, and also a lot of business experience,  but much like Burke, he may want to stay on the Harbor District Review Board and learn the chops a little bit longer. Gay is also a huge fan of the Baldwin enterprises; not necessarily a bad thing, but not really a quality you are looking for in a council member. If Southport asks Gay to jump, his only reply may be ‘how high’. Gay is also in favor of attracting more wealthy retirees and their money. He is also in favor of increased density as a way to bolster the census, so as to one day get another hospital in Northampton. It was noted by the Mirror that there are other places, north and across the bay, that have higher density and a hospital if that is indeed the desired end state.

FINAL ANALYSIS: in 1927, H. P. Lovecraft wrote The Colour Out of Space, the tale of an area known by the locals as the “blasted heath”, where years earlier, a meteorite crashed there, “poisoning every living being nearby; vegetation grows large, but tasteless, animals are driven mad and deformed into grotesque shapes, and the people go insane”. That just about sums it up, and there you have it.