LOS ANGELES — A recent court victory by an Orthodox synagogue in Irvine in a case brought by United Poultry Concerns, a Virginia-based animal rights group, is not the end, according to the group’s founder.

United Poultry Concerns sued Chabad of Irvine last year for the slaughter of chickens in the Jewish religious ritual of Kapparot. The case was dismissed on May 12, but Karen Davis, founder and president of United Poultry Concerns, is steadfastly determined to keep pushing for an end to what she feels is the inhumane killing of chickens. Davis said her group will appeal the ruling. 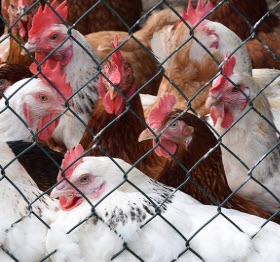 “The court found that accepting money for killing and discarding chickens is not a ‘business practice,’ which is the only way we can challenge this as a private citizen,” Bryan Pease, a San Diego-based attorney who represented United Poultry Concerns, told the Northern California Record. “Now it’s more important than ever to get the local authorities to step up and enforce the anti-cruelty laws. In the meantime, we are appealing this ruling to the Ninth Circuit.”

Davis told the Northern California Record that she became aware of the Jewish ritual of Kapparos in 1995 after her organization received calls from people in New York.

“They expressed great distress about chickens in transport crates, stacked up on the sidewalks without food, water or shelter,” she said. “Birds were crying and completely neglected, sitting out there for days without food or water.”

Kapparot is practiced on the eve of Yom Kippur and involves waving a chicken around while reciting a prayer in which the bird takes on the sins of a person. Kapparot is not a mandate on the Jewish religion, and most Jewish people don’t practice the ritual, Davis said.

“I started writing letters to editors and talked to other people in the animal rights movement who are Jewish and who were familiar with the practice,” Davis said. “Not everybody was aware that this particular chicken swinging and slaughtering on the public streets was still being conducted as part of the Kapparot ritual.”

In 2010, her group started actively working to end the use of chickens in Kapparot.

“They are being held like a sack of garbage by these practitioners, who then swing them over their heads by their wings or legs,” she said. “The chicken is a punished object in the ritual. The birds are treated like trash and are considered to be a symbolic repository for the sins of the practitioner.”