The Cape Charles Mirror has received reports of a massive menhaden fish spill which extends from Latimer’s Bluff to Fishermans Island. Early reports indicate that the spill is the result of some form breach from fishing operations near the CBBT. Omega Protein, which operates a reduction fishery in Reedville, VA, has so far said the spill is not associated with their fleet; however, whether or not the fish were bound via contract fisherman for the Reedville reduction fishery has not been confirmed. The Mirror spoke with Northampton County Board of Supervisors Chairman Spencer Murray, and he stated that from Latimer’s Bluff looking south, the beaches were covered and that the stench was overwhelming. The Mirror has confirmed that fish are also washing up at Sunset Beach Resort as they are preparing for their Grand Opening and 4th of July festivities.

UPDATE: From Supervisor Murray, “Fortunately Sunset Beach is not as heavily covered. I have spoken to John Bull, VMRC Commissioner who says the source of the spill has not been confirmed but could be dead fish from a broken pound net. Omega Protein says it is not their spill but they have sent one crew from Norfolk (HEPACO) who are cleaning Latimer’s now. I asked that Omega send another crew to Sunset which looks almost full now but will have 1,700 campers tomorrow. Todd Burbage is here and has said he will send his crew down to the beach if necessary.
Just heard there are two more crews coming. One for Sunset and one for Kiptopeake State Park which is also covered.
Remediation is good and thanks to all for the quick response. The incidents will hopefully cease.”

The is the second large spill on an Eastern Shore beach in so many weeks. 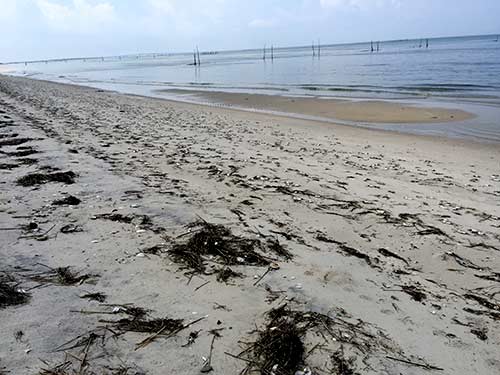