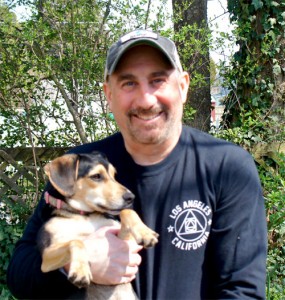 A little over a year ago, right after the New Year, my wife and daughter were driving home, and as they drove down Plum Street in front of Central Park, a small puppy ran across the street in front of them. My wife stopped and opened the car door, and called the little dog over. With no thought at all, the puppy jumped into the car and into my wife’s lap. With temperatures dipping into the low teens, they brought the little dog home with them. I was sitting in front of the television watching the NFL playoffs when they came through the door with the puppy in hand.

“We found her just roaming around the park,” said my wife. “It’s too cold to just leave her outside.”

“Well, she obviously belongs to someone,” I said, inspecting the dog. “She looks too clean to be a stray. Probably someone’s Christmas puppy that got out.”

“We should keep her!” said my daughter.

“Oh, no, no, no, no,” I said. “Go make some signs and put them up, and then take her around the neighborhood and see if she belongs to somebody. We’ll keep her until Sunday, but after that, we take her to the SPCA.”

With that, my daughter made and posted a few signs, and took the dog around town, trying to locate an owner. I even ran a small post in the Cape Charles Wave for a found dog. That evening, the rest of my family went out to a movie, leaving me alone with the two dogs, my lumbering brown lab Chloe, and the stray pup we were ‘babysitting’. Looking back, that may have been their master plan all along. As I watched the football games, the little pup sat on my lap, and when I got up, it followed me all around the house.

Whenever there was a noise, such as car door closing, the new little dog would sit up and growl, looking back at me as if to say, “I got this…but I may need backup!” I let her play this out a few times, but it was really unnecessary; she already had the job. I let the ‘found dog’ notice run in the paper another couple of days, but with no response, I called the Wave and told them to take it down…we were going to keep the dog. George just said, “It was meant to be!”

I’m not sure I believe in love at first sight, but in this case, it was pretty close. Sitting there on the sofa with a cold martini, the last shards of red winter twilight filtering through the window, the soft hush of a west coast playoff game with the volume turned low, my chocolate lab Chloe snoozing to my left, and the new little dog napping in my lap—Milan Kundera said it, “Dogs are our link to paradise. They don’t know evil or jealousy or discontent. To sit with a dog on a hillside on a glorious afternoon is to be back in Eden, where doing nothing was not boring–it was peace.”

I have to admit, I have never known much about smaller dogs. I have always had larger breeds in my life, whether it was our standard poodle Jo Bear when I was growing up, or later my German Shepherd Lucy (110 pounds of athlete), or now, my beautiful lumbering beast of a chocolate lab, Chloe. But Daisy was different; small stature, yet compact muscle, and nothing put pure speed and agility. We think she is a min pin beagle mix, but whatever she is, the combination resides in beast-mode. The self-important, annoying squirrel that lives in the back yard can attest to that. Last fall, when we estimated that Daisy was almost a year old, she first caught site of the squirrel gathering nuts in the back yard. I’m not sure whether she saw the screen in the door, or just didn’t care, but she long-jumped right through it (me and my son Joey estimated, after rough measurement about 14 feet), and ran up to the obnoxious rodent who was obviously taken aback by Daisy’s sudden, yet talented entrance. Not sure what to do at that point, Daisy stood, pointing at the squirrel, and looking back at me as if to say, “Aren’t you supposed to shoot this thing or something?” The squirrel, for his part, held its ground, threw a bunch of attitude, and held the pecan up with both hands as if to say, “Okay dog, if you want me to ram this nut up your rear end, we can do that, but I suggest instead you carry yourself back inside.” I called Daisy back, told her ‘good dog’, and tried to explain to her that that particular squirrel ‘had issues”, and the less interaction with him the better.

Daisy and the squirrel play this game at least once a week, but where Daisy really rocks is on the trail. I don’t hunt anymore, but I still love taking the dogs out as if I were. Chloe is much more the birder, but Daisy excels at jumping rabbits. The great thing about watching Daisy and Chloe romp through the weeds and marshes, is just what good buddies they have become; that is never more evident than when Daisy jumps the rabbit and Chloe goes after it (they have both found out that jumping the rabbit is the easy part, catching it is another matter– Eastern Shore bunnies are somewhat clever).

Sitting on my back steps last Friday, watching the dogs wrestle and then lay down on a warm, sunny patch of grass, I can hardly believe it’s been a year since Daisy came into our lives. While my sister was visiting last summer, she was hugging Daisy, and telling her she lucked out to find a home like this. “No”, I thought. “We’re really the lucky ones.”