There is a new children’s book about Pony Swim that will be released during Pony Swim, Wednesday, July 25.  Nicholas Goes To Pony Swim! is a 6 x 9 inch paperback pictorial journal of a little boy’s first exciting visit to Pony Swim. 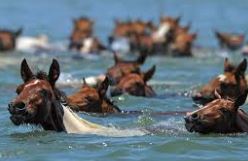 Nicholas Goes To Pony Swim! describes Nicholas arriving at Chincoteague Island, riding a bus from the high school, playing in the mud and water at Memorial Park, watching the ponies swim, parading the horses to the fairgrounds, riding the carnival rides, watching Misty at the Island Theatre, and even getting on board Chopper 10.  That’s a LOT for a little boy to do in a single day!

As a bonus, the authors hid a horseshoe on every page for little kids to find.

Books will be available in Chincoteague at the Island Theatre and Sundial Books and in Parksley at Jaxon’s Hardware for $5.

The author will be having a book signing the entire week of Pony Swim in front of the Island Theatre in Chincoteague from 10 AM until 1PM.