The last few months in Cape Charles have been interesting ones in regards to land sales. Certainly, the purchase by Eyre Baldwin’s entities around the harbor may have the most impact. Baldwin first purchased lots at the east end of the harbor, which will play an integral part in the future of Cape Charles Yacht center. But more interesting was the purchase of the Tavi property, arguably the most prime waterfront parcel in Cape Charles. The clear title, being held in Israel has so far proven to be elusive, yet once that is secured, the plans for that piece of property will become more available.

In an Executive Session two Thursday nights ago, the Cape Charles Town Council met to discuss the sale of real property within the Historic District. So far, the Mirror has not been unable to find out just which property the town is trying to sell, and to whom. We did contact the town planner who was able to supply a map (from 2006) that showed properties the town owned. Even as it is out of date (it still shows the town owning the old school), it was a good place to start to unravel the mystery. 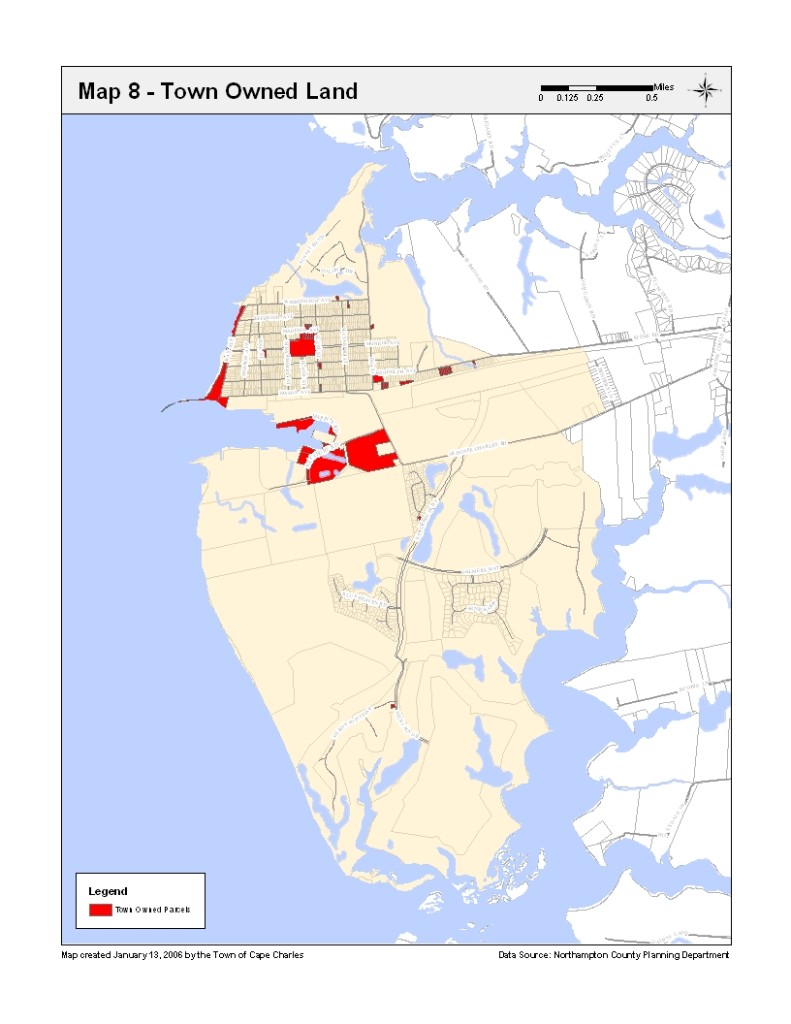 Reviewing what we know, the only parcel left that seems legitimate is the one across from the old school which currently contains the skateboard park. If this is true, it will be a sad day for our town. For the athletes, this parcel was thought to be designated as the location for a full on basketball facility, enough to hold two full size courts. The move to sell this property, more than likely to developers, who more than likely will produce the same cheap and shoddy work defined by the old school ‘rehab’ across the street, is disappointing. But then again, this is the new Cape Charles.

With the Planning Commission’s removing ‘basketball courts’ from the draft of the comprehensive plan, this is the final dagger in the heart of the hopes for a younger, more vibrant town – it instead demarcates the moment in time where Cape Charles can finally achieve legitimate retirement community status, without the pesky noise of the ball banging off the rim. The question is, where was the business community in this decision. Where was the Shanty? It wasn’t too far back that Jon Dempster addressed council, saying he would, along with other members of the business community, match funds to get the basketball courts back. What happened with that? It would seem if these guys had put half the effort into advocating for our youth as they did attacking the Southerns and the Cape Charles Wave over the award of the Cape Charles by the Bay website, we would already be playing ball out there.

Obviously, the thought of groups of African American males, talking smack, listening to hip hop, possibly cursing now and then was just too much of an affront to the genteel white aesthetic. Losing the Cape Charles Little League ball field was sad and humiliating, but forever banning basketball is worse. Despite our love of football, baseball, and for me, soccer, basketball is the sport that defines the Eastern Shore, it is the place where class, culture and age all intersect, where we, from all walks of life, can come together. If this town is ever going to heal from the old school battle, it will only happen after my son can once again go out our front door and walk down to the courts where the sweet sounds of the dribble, a no-look pass, and a pure jump shot can be heard echoing through the alleyways.