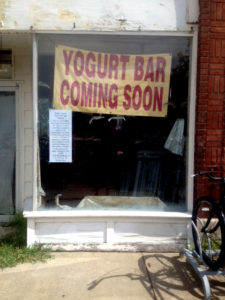 Cape Charles Code Official Jeb Brady met with a contractor at the site of the ‘Yogurt Bar Coming Soon’ building at 207 Mason Avenue to post a repair or demolition notice.  According to town staff, the property owner has been notified by certified and regular mail on countless occasions and still the building is out of compliance.   Building permits have been approved several times over the years, and little to no permitted work has been done by the property owner. Town staff provided the timeline for the action taken with the current and present owners to date for the at 207 Mason:

March 8, 2013: Conditional use approvals and permits for commercial 1st floor 2nd & 3rd story apartments.
November 11, 2013: Made on-site inspection with 3rd party structural inspector and found that they were not following the approved plan. A stop work order was issued until new plans could be put in place to address all the deficiencies. See SPC report in the file.
February 14, 2014: Sent a letter requesting that all building material stored on Town property must be removed.
March 26, 2014: Permits expired due to lack of work. The stop work order was never lifted.
June 10, 2016: New conditional uses were approved for same as 1st time and new plans were submitted and approved. Permits were issued.
November 9, 2016: Received a complaint from adjoining property owner agent that a portion of the party wall separating the two building is stair step cracking. I told them they needed to get an engineer involved to determine if it was an issue they needed to address or if the 207 Mason Avenue project had caused the damage.
November 18, 2016: Received a report from SPC Structural addressing the failing wall. It was determined that the 207 Mason project had caused these issues when they demolished the roofing system that was in fact part of what was holding the wall up.
November 30, 2016: SPS Structural engineering sent the owners of 207 Mason an outline letter as to what needed to be done to get the project restarted since the permits were due to expire in less than a week.
December 7, 2016: Permits expired due to lack of work on the project. 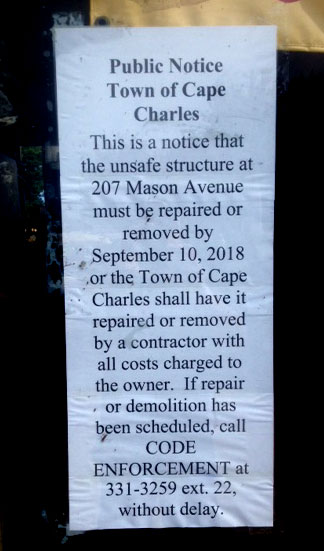 December 28, 2016: A letter was sent to the owners addressing the failing party wall that was caused by them when they started demolition. They were given 15 days to address the issue.
March 24, 2017: Met on site with owners, contractor, and engineer regarding issuance of a building permit for the same construction as the previous two permits were issued for. See SPC Structural report.
March 25, 2017: Letter was sent from Town Planner regarding the revocation of the conditional use permit to add 2nd and 3rd floor living space to the building.
April 6, 2017: Engineer did a report of the overall condition of the building and found it to be in rather poor condition citing that the existing roofing members would need replacement soon if not weathered in and that a good portion of the structure is not even under roof at all.
May 15, 2017: Town sent a notice of violation letter citing all the violations regarding the structural aspects of the building.
May 17, 2017: Town placarded the structure as unsafe/uninhabitable.
June 27, 2017: Town sent a final notice to comply giving the owners 15 days to put a plan in place to begin fixing the building up or possibly demolishing what is left.
June 30, 2017: Town sent a letter to mow the grass and weeds in the rear of the structure.
August 22, 2017: Town had attorney send a letter to owners regarding non compliance of the previous notices that the town had sent.
October 15, 2017: Town received revised plans to just fix exterior walls, add new roof, and weather in the structure as it once was.
December 12, 2017: A permit was issued to fix exterior walls, install a roofing system to prevent the structure from deteriorating anymore.
June 18, 2018: The permit for work on the building expired. No work commenced in the 180 days prior to this date.
June 21, 2018: Sent a certified letter to the owners letting them know that the permit had expired and that the town would be taking action against the property.