The rash of strandings documented in Hampton Roads and along the Eastern Shore are part of a larger event that has played out along the eastern seaboard.

Press Release – Since January 2016, 41 humpback whales have died along the U.S. East Coast, from Maine to North Carolina. A team of veterinarians, marine biologists, marine mammal stranding network members, and others are determined to understand why.

Humpback whales in U.S. Atlantic coastal waters are no longer an endangered species, but they are an integral part of our marine environment – and one of the most iconic. Thus, the significant die-off of these whales (defined as an ‘unusual mortality event’ under the Marine Mammal Protection Act) demands an investigation to determine what environmental conditions or human activities could be the cause.

While no evidence of infectious disease or high levels of harmful biotoxins have been found in animals tested so far, these will be some of many indicators scientists will research. For 10 of the whales, however, NOAA found evidence of vessel interactions, such as propeller wounds or blunt force trauma indicative of a ship or boat strike. The investigation will evaluate these findings as well any changes in habitat. 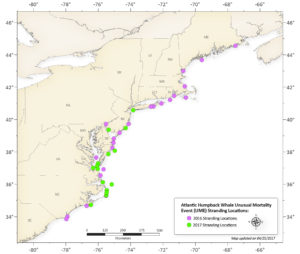 Partial or full necropsy examinations were conducted on approximately half of the whales. Of the 20 whales examined, 10 had evidence of blunt force trauma or pre-mortem propeller wounds indicative of vessel strike.

Report a stranded or floating whale

The most important step members of the public can take to assist investigators is to immediately report any sightings of live whales in distress or stranded, or dead whales. Make the report by calling the Greater Atlantic Marine Mammal Stranding Hotline at 866-755-6622, the Southeast Marine Mammal Stranding Hotline at 877-433-8299 or contact the U.S. Coast Guard on VHF Channel 16. Again, do not approach or touch the whale.