In August, former supervisor Granville Hogg, along with John Coker and County Administrator Charles Kalakowski met with VDOT to take another look at the Food Lion intersection project (FLIP) to see if there were other alternatives.  After the meeting, VDOT was to get back to Hogg and the County on the installation of a roadway tying into Bayside Road and potential for a stop light.  So far, that has not happened.

Sources are now telling the Mirror that our local representatives are not planning to follow through on the proposed roadway.

The way this works, is that if the public does indeed care about meaningful change at the intersection, they must voice their concerns first through elected officials, and then through VDOT themselves. If apathy wins the day, VDOT will apply Occum’s Razor and go with the easiest, and cheapest solution.

Below is an email from Hogg to Chris Hall of VDOT, which adequately outlines the current state, and where the project needs to go:

At our meeting in mid-August you indicated additional traffic studies would be conducted to determine if a stoplight would be warranted and to review further the cost of the roadway that had been proposed.  I have not received any information with regards to either concept.  As indicated in my communication in early September below, I took heart to your thoughts and suggestions of how to accomplish the objective and provided a sketch that would satisfy the conditions.  Recognizing there is a budget constraint I was interested in the progress on the estimated cost of each of the proposals any obstacles VDOT envisions in the near and long-term.  There was an indication that a Stoplight at the median crossing would potentially be a short-term solution.  Based on the recent traffic patterns and volume that I have witnessed traffic recently (since our meeting in August) the number of vehicles that are stacked up headed either North or South Bound on U.S. 13 far exceeds the space between the existing Stoplight and the median crossing at the shopping Center entrance.  With the Railroad crossing being a short distance from either the existing light or a proposed light at the subject median crossing, even though it may not be active, certain vehicles must stop at the crossing, this is more reason to support the construction of the roadway from Bayside Road.

I look forward to hearing from you on any progress VDOT has made to include traffic Studies and cost estimates and any geometry for a resolution.  Obviously I would seek input from the Citizens in the area as they are the persons that must utilize and demonstrate the new traffic pattern.

On a separate note, In the world of today’s technology, is there the opportunity to make a virtual model of this situation or others to get driver’s responses to any of the traffic situations that VDOT may develop.  FAA and Military does much of this in pilot training.  I would think there are other applications like this in developing solutions to traffic problems.

Land is the least of the consideration.  One of the suggestions made at the meeting was to have a Decelaration/Right turn lane leading into the northern entrance to the Shopping Area for the U.S. 13 North Bound Traffic and a “JUG HANDLE” for traffic to proceed to Cape Charles or return South bound on U.S. 13.  Obviously the DECELERATION/RIGHT Turn would be one lane traffic.  If that one lane came to a STOP SIGN intersection with Country Place (northern exit from the shopping area) where it would then become a TWO LANE ROAD back to Bayside Road.  I believe there would be adequate ability for extended length vehicles to egress from the shopping area which is also a concern and provide additional opportunity for “local traffic” to avoid the Median crossing.  By extending the Proposed roadway back to the end of the curve on Bayside would provide the ability to STACK SOME OF THE TRAFFIC on Bayside Road.

This would assist by eliminating the lengthening and widening of 2 or more of the PROPOSED TURN LANE IMPROVEMENTS. Hopefully this will be incorporated your thoughts.

I look forward to hearing from you on ANY REVISED PROPOSAL that might include the traffic light warrant, the Speed reduction, the FLASHING LIGHTS, the Rumble Strips, as well as incorporating any other suggestions. 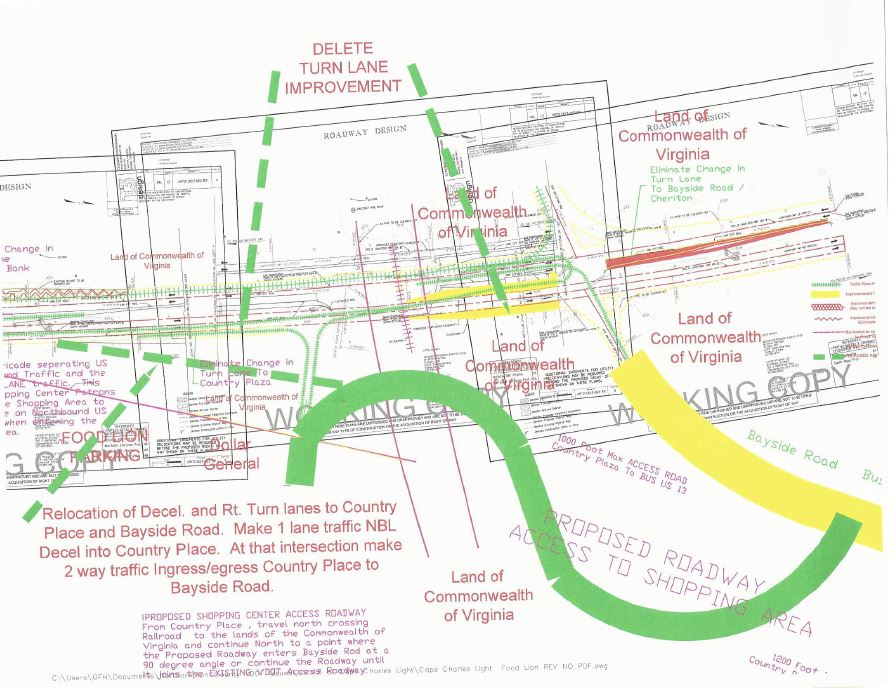