The Northampton County Joint Industrial Development Authority has advertised a public hearing regarding a $10 million bond for a project in Williamsburg which will construct senior living quarters and facilities. The $10 million financing request from Northampton County is part of the $47 million needed to build this project. 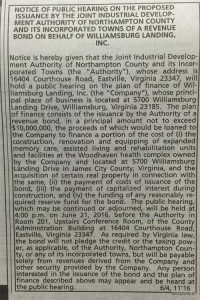 The Mirror contacted Economic Development Director Kris Tucker to ask if the obligation by JIDA to partially fund an assisted living facility in Williamsburg would lessen the amount of financing that is available for a similar project in Northampton County. “My understanding is that the Northampton BoS has indicated that they will not be approving any internal JIDA bonds for this cycle for, and has directed that the JIDA open their capacity to other municipalities. As I am sure you are aware, pass-through bonds are a reliable, no-risk means of revenue for the County. So, while any bonds issued do decrease our potential capacity, for any given year, in this case, said capacity would have gone unused,” Mr. Tucker said.

Note: Although not specifically mentioned in the notice, aspects of the project are part of the Riverside Health System’s Community-Based Continuing Care (CBCC) –they will be in partnership with Williamsburg Landing, offering the program to residents throughout Williamsburg and Newport News, as well as the Middle Peninsula region.

What is the Risk?

Revenue Bonds are municipal bonds which are issued to fund a specific revenue generating project, in this case the expansion of health services at Williamsburg Landing. These bonds are not backed by a taxing power, but investors in revenue bonds are paid from the revenues generated from the projects they are issued to fund. Public projects using revenue bonds can include toll roads and bridges, to water and sewage plants, to hospitals and public universities.

If the project that a revenue bond is issued to fund cannot afford to pay bondholders, then the government to which the municipal bonds are tied does not have the obligation to pay the debt. For investors though, revenue bonds as a category are considered riskier than general obligation bonds (they also pay a higher rate of return). The project in question here is less of risk to fund than others, say building a tennis complex, which could incur revenue swings based on the economy. Even in an economic downturn, health related services will more than likely still be required