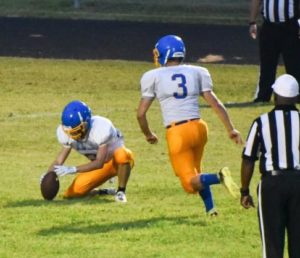 The relentless ground and pound running attack of the Northampton Yellow Jackets proved to be too much for an overmatched Surrey squad. Cory Smith piled up over 100 yards and a brilliant touchdown to lead the Northampton attack.

From the outset, Surrey had trouble sealing the edge, as Smith, with solid downfield blocking from his wide receivers chewed up big gains. Big back Carlton Smith kept the Surrey defense on its heels as he pounded the ball inside the tackles. Northampton, despite struggling with extra points, led 18-0 at the half.

An early second-half score gave Surry some hope, but the Jacket defense tightened, holding Surrey to under 70 yards the rest of the game.

Handing the ball to #1 Carlton Smith proved to be a steady diet the rest of the game. Sometimes carrying three of four defenders, Smith eventually balled his way into the end zone, sealing the win. Trip Wescoat added a 36-yard field goal to complete the victory.

The win leaves the Jackets with a record of 2-0. They are scheduled to finish the game against Northumberland at home on September 15th at 5:00. Those times will finish the second half of that game, which was postponed due to lightning. Northumberland leads 14-0 in that contest.

Depending on the outcome of Hurricane Florence, Northampton will take on Windsor at Windsor next Friday night at 7:00.