WARSAW (October 10, 2018)—Attorney General Mark R. Herring and the Virginia Department of Environmental Quality today announced the filing of a lawsuit against Virginia True Corporation for its significant and repeated environmental violations at its development project near Fones Cliffs in Richmond County.

In the suit, Attorney General Herring alleges that Virginia True engaged in unpermitted land clearing and land disturbing activities, failed to develop a stormwater management plan, failed to install measures to prevent sediment runoff, failed to stabilize the land it was disturbing, and failed to correct the violations in a timely manner even after being notified. The suit was filed after the matter was referred to the Office of Attorney General by the Director of the Department of Environmental Quality (DEQ), whose staff also conducted inspections, issued three official Notices of Violation, and notified Virginia True of the ongoing violations on multiple occasions. 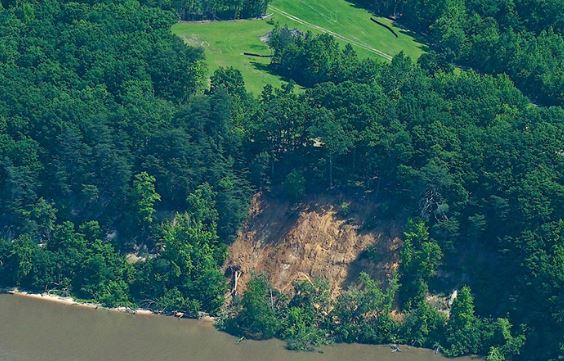 An aerial photo taken on May 24 shows the proximity of a landslide at Fones Cliffs to an area that was cleared of trees in the fall of 2017 without the needed permits. River advocates are concerned that the clearing contributed to the landslide, but regulators said it is difficult to pinpoint an exact cause at a site where several factors contribute to erosion. (Courtesy of Friends of the Rappahannock)

“This lawsuit includes some very serious allegations that Virginia True repeatedly disregarded its responsibilities to protect the land and waterways around its project, failed to seek and obtain the permits it knew it needed, and continued to cut corners and ignore its responsibilities even after receiving multiple notices of violation,” said Attorney General Herring. “We’re asking the court to put a stop to these violations, and to compensate the Commonwealth for the predictable and needless damage that has been caused.”

“This summer and fall, DEQ closely monitored required compliance at the Virginia True site and addressed violations with the full enforcement authority of our agency, which in this case included referral to the Attorney General’s Office,” said DEQ Director David Paylor. “We are pleased Attorney General Herring is taking this matter as seriously as we are in order to hold Virginia True accountable.”

The Commonwealth’s lawsuit asks the court for an injunction to force Virginia True to comply with environmental laws, for the maximum allowable civil penalties, and for any other relief that the court believes to be appropriate.

The lawsuit explains that DEQ notified Virginia True of violations in February, April, and August 2018, yet violations continued. The suit alleges seventeen counts of illegal actions by Virginia True at Fones Cliffs:

The case has been filed in Richmond County Circuit Court and a copy of the complaint is available here.