Special to the Mirror by Tony Picardi

This week we witnessed yet another episode of destructive weather-related events. The frequency and destructiveness of wildfires, storms and severe heat waves has been increasing year-by-year. The consequent property destruction and loss of life among US citizens in the continental US and in Puerto Rico continues to set records. 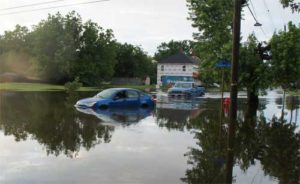 Fires and storms will always be with us. The long-term background level of these events is well-understood by climate scientists. The science of global warming tells us that the frequency and severity of weather-related events has been increasing and will continue to increase above this background level until greenhouse gas emissions are stopped. These recurring weather disasters are more severe than they would have been if greenhouse gas emissions had been stopped any time in the last 20 years after human-caused global warming became a scientific consensus.

The difference between the background level of weather events and the level of death and destruction that we are now experiencing is a “climate catastrophe tax”. This tax is measured in dollars, environmental destruction and human suffering and death. This catastrophe tax has been visited upon us by the republican global warming deniers who refuse to do anything about stopping greenhouse gas emissions. Complicit with these republicans are the citizens who voted for them with full knowledge that these representatives would refuse to deal with this recurring disaster.

What should we do when our representatives refuse to stop a worsening catastrophe? It would be nice if those representatives, along with their willing accomplice voters, paid the climate catastrophe tax themselves. Sadly, we cannot hold voters accountable for willful ignorance. But we CAN at least hold our representatives accountable. If we cannot serve them with a catastrophe tax directly, then at least we can remove them from office so they cannot continue to cause death and destruction through their failure to do anything about global warming.

The Eastern Shore was lucky to escape a head-on collision with a gigantic storm this week – a storm that was made stronger by the Atlantic Ocean which is at record high temperatures. The next time we may not be so lucky. Your property and your lives depend on you removing Republicans from office in the next elections. I urge you to act responsibly.

Tony Picardi is retired in Belle Haven where he grows soybeans and manages a wildlife refuge. He gives lectures and leads tours on the natural history of the Eastern Shore and global warming. He holds a Doctor of Science Degree from the Massachusetts Institute of technology.