Nearly 2,000 state-regulated high-hazard dams in the United States were listed as being in need of repair in 2015, according to the Association of State Dam Safety Officials. A dam is considered “high hazard” based on the potential for the loss of life as a result of failure.

By 2020, 70 percent of the dams in the United States will be more than 50 years old, according to the American Society of Civil Engineers.

The United States Army Corps of Engineers keeps an inventory of 90,000 dams across the country, and more than 8,000 are classified as major dams by height or storage capacity, according to guidelines established by the United States Geological Survey.

Last week, State officials ordered the evacuation of more than 180,000 people downstream of the Oroville Dam in California, the state’s highest, on Sunday night amid concerns that a largely earthen emergency spillway could collapse and cause catastrophic floods on the Feather River. But that spillway was in use only because damage to the dam’s main spillway, a concrete chute, had been discovered earlier in the week. Operators noticed turbulence in the water rushing down the spillway’s chute at a rate of 50,000 cubic feet — about 375,000 gallons — per second. They reduced the flow to investigate, and discovered that a large portion of the concrete had been washed away.

In 2016, the Association of State Dam Safety Officials estimated that it would cost $60 billion to rehabilitate all the dams that needed to be brought up to safe condition, with nearly $20 billion of that sum going toward repair of dams with a high potential for hazard. 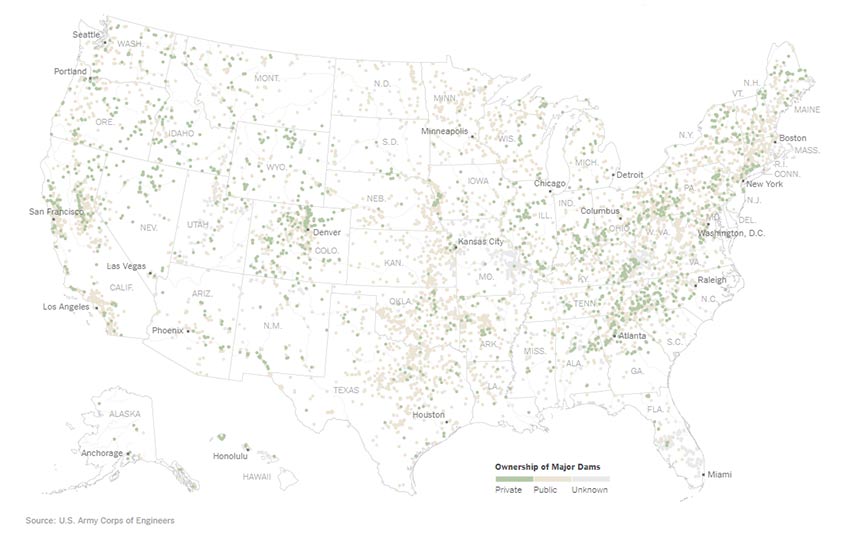