CHINCOTEAGUE, Va. WBOC- Chincoteague’s annual pony swim and auction is being questioned by the People for the Ethical Treatment of Animals. PETA wrote a letter to the Chincoteague Fire Department calling the swim “dangerous” and the auction “reckless.”

Many people who live and work in Chincoteague have connections and memories to the pony events. And they say the don’t want to see the tradition, which is entering its 93rd year in July, changed.

Artist and honorary firefighter, Kevin McBride, has lived and worked in Chincoteague for nearly 40 years. 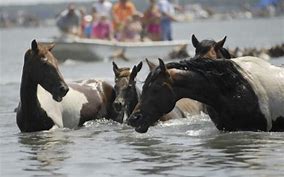 “The firemen take excellent care of their horses, it’s their bread and butter so to speak,” McBride said.

Brushstroke by brushstroke, McBride paints the poster for the annual pony swim every year for the past 35 years.

But PETA does see a problem with it. Jennifer O’Connor, a writer for PETA, penned a letter to the fire department expressing her disagreement with the tradition. O’Connor also mentioned the recent deaths of two ponies.

O’Connor’s main concern is the pony auction because there’s no vetting the people who buy the ponies. But those in town we spoke with don’t see any issues.

“People are paying a lot of money for these horses, so in theory they also have the funds for everything back home to take care of the ponies,” Chincoteague tourist, Colleen Kelly said.

The fire company tells WBOC, “PETA’s argument is faceless.” They also say the two recent pony deaths having nothing to do with the swim.

O’Connor said she’s not blaming the recent pony deaths on the swim or on the firemen, but rather she used the deaths as a springboard to start conversation about the Chincoteague pony swim.