On Tuesday, the Cape Charles Planning Commission voted to reject any notion of angle parking on Bay Avenue, and recommended that the town maintain the current parallel parking design.
Planner Larry DiRe presented a thorough report detailing why the angle parking is not appropriate for the beach. DiRe collected parking data on Bay Avenue at various locations from May 27 to August 27; staff conducted observations and counts of the parking along various segments of Bay Avenue. Data was collected between 11:30 am and 2:30 pm. 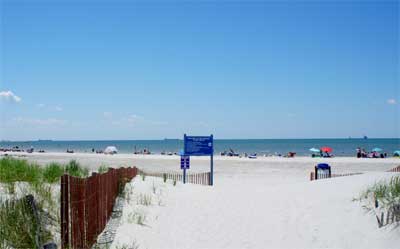 The estimate for total parking is sixty-six spaces. From staff report: Data reveals the following: out of a total of 54 observations, the sixty-six count was exceeded 18 times, or 33.3% of the observations. The cumulative 2015, 2016, and 2017 counts show 180 individual observations, with 53 instances of the count exceeding sixty-six vehicles. A three-year total of 29.44% of observations exceeded the sixty-six vehicle standard. The 2015 and 2016 two-year total was 27.78%, so an increase is recognized. It should also be noted that golf carts parking on the west side of Bay Avenue park perpendicular to the curb, resulting in more space for vehicles to park, compared to those golf carts parking parallel in an eighteen-foot long parking stall. Perhaps not surprisingly, thirteen of the eighteen times (72.22%) the sixty-six vehicle standard was exceeded occurred on a Friday, Saturday, or Sunday. This summer, golf carts accounted for 22.36% of all vehicles counted during the 54 observations.

DiRe contacted other localities that have toyed with implementing reverse angle parking, such as Kennesaw, Georgia, Boothbay Harbor, Maine, and southern New Hampshire. These localities rejected the parking scheme for many of the same reasons citizens of Cape Charles dislike it: mainly it’s just stupid–these localities recognized its shortcomings before implementation.
Another issue for Cape Charles is that angle parking will disrupt the popular and burgeoning food truck market. These vehicles would no longer be able to operate on the west side of Bay Avenue, and would have to relocate across the street, creating issues for the homes located there.

Full-cab pick-up trucks, sport utility vehicles, vehicles with rear-mounted luggage racks, trailors, wheelchair racks, bicycle mounts would create nightmare scenarios for beach parking. These types of vehicles, like food trucks, would have to relocate to the east side of Bay Avenue.

Golf carts, which are becoming increasingly popular, are also influencing beach parking. They require a small parking footprint, and have adopted an almost side-by-side approach, which maximizes the use of space. Reverse angle parking would also severely limit the visibility for these vehicles.

As was noted by DiRe’s report, reverse-angle parking is a solution in search of a problem.

The Cape Charles Town Council also met this week to discuss parking at Bay Avenue. From discussion, it soon became clear that not a single member had bothered to read the report and recommendation from the Planning Commission. Instead, discussion revolved around the “terrible” parking problem that currently plagues Bay Avenue. The insider push from council, mainly led by Councilman Andy Buchholz, is to implement reverse-angle, or even front-in parking as soon as possible. Other council members have told the Mirror off the record that there are concerns about Bay Creek council member’s business only approach to town management—that they are the tool the business community leverages to get its way. As a note, Buchholz, who lives in Bay Creek, was on the Planning Commission that recommended reverse-angle parking on Mason Avenue. Concerns are that business needs are being put in front of resident’s quality of life.

Town Council directed the Planning Commission to refine language, and the matter will once again be taken up by council either at the regular meeting or via a work session. For the time being, parallel parking will be left in place on Bay Avenue.

The danger here is that once again decisions are being made by people that don’t even live in Cape Charles and never frequent the public beach. They have their gated pools and private beach, so concerns for the quality of life of Cape Charles residents is of no concern. They are more than happy to destroy the ambiance of our beach, just as they have destroyed the ambiance of Mason Avenue just to be able to pack 20 so more parking spots into the space. What are the real costs vs. the real benefits, who gets to enjoy them?

News Flash: Beaches are crowded in the summer. That is a good thing. This writer grew up in Virginia Beach, and even 40 years ago, the beaches were just as crowded then as they are now, maybe more. The weekends in Cape Charles are going to be crowded, and if parking must spill into the neighborhoods a few days a year, that’s life at the beach. If it bothers you, move.

Bay Avenue parking is organic, beautiful and perfect, the way all beach parking should be. Just leave it alone.