The Cape Charles Historic District Review Board has been received an application for a Certificate of Appropriateness from the property owner for improvements to a single-family home at 615 Randolph Avenue. 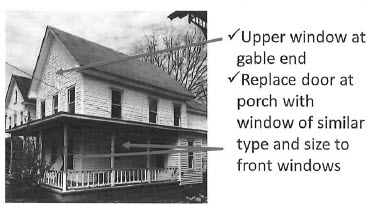 According to the owner, “The Goal of the property at 615 Randolph Avenue is to protect the rich architectural integrity of the district. From investigating neighboring structures to the home, we believe it to be similar to other gable-ended homes on the street. While our structure does not contain the rich architectural details of some others along Randolph Avenue, we still wish to change as little as possible while also creating and energy-efficient, fully renovated home in the character of Cape Charles.”

The exterior is currently white vinyl siding; the applicant plans to keep the existing siding, and power wash as needed.

An application has been received for a Certificate of Appropriateness from the property owner at 624 Jefferson for a rear extension to an existing addition, and window changes to the front and
back of the building. The building is a contributing structure on a conforming size lot.

The intent of this project is to bring the windows into conformance with both the Guidelines and the zoning ordinance, and expand the rear addition.

The proposed bay window is to be replaced with historically correct 2x double hung windows. 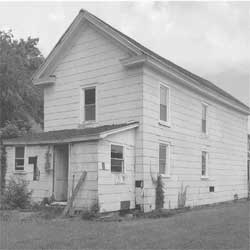 An additional thirty-two (32) inch double hung window will be added, as well as a French door. The front, first floor window placement conveys a “bay” or “picture” window affect. This type of window composition is not consistent with the historical integrity of “circa 1910 front gable ell dwelling.” Picture windows, and horizontal windows, are allowed “only in traditional American ranch style architecture” per Article III, Section 3.2.I.4 of the zoning ordinance.